Learning To Stand - Development and Training

Learning any new skill takes hours of practice with repetition and exploration of the different ways to achieve a desired outcome.  It requires persistence, repeated experience of success as well as repeated failures.[1] [2] Learning to stand and cruise with support, and then to stand without support and take the first steps can be divided into three phases:

The Alberta Infant Motor Scale (AIMS) provides a useful guide to the sequence of abilities commonly seen in typically developing infants, as well as the age range at which 50-90% of infants acquire these abilities.[3]

The AIMS was standardised on infants living in Canada, but has subsequently been studied in numerous samples around the world.[4][5][6][7]

Interestingly, although there are differences in the age at which infants in different studies achieved the items in each subscale, the sequence of the items remained the same. Thus, for the purpose of describing the development of standing, the sequence of acquiring the different items is more useful than the age of achievement.[1]

When newborn infants are supported around the upper chest in an upright position with their feet touching a support surface, they will take variable amounts weight on the lower limbs.

Repeated steps can be elicited if the infant is moved forwards. This postnatal stepping response can be elicited right after birth, but soon diminishes and disappears by about 2-3 months of age.[8] 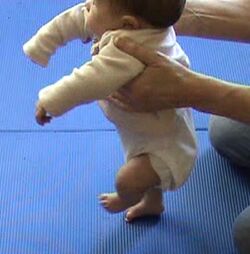 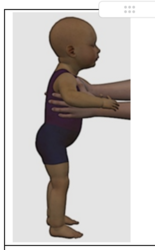 Standing with caregiver support around the chest

In this phase of learning to stand, when the infant is held upright supported around the chest by a caregiver, they learn to actively extend their trunk, hips and knees to support their body weight.

At 1-2 months, the infant stands with their hips in some flexion and their trunk tilted forwards. They are not yet able to support their weight fully.[3]

With practice, and as the lower limb extensor muscles get stronger, the infant supports more of their body weight when supported by a caregiver.[9]

By 5-6 months, infants are able to fully support the weight of their head and trunk. They stand with their hips in extension and in line with the shoulders. Infants have also learned to stand holding onto a caregiver’s hands. 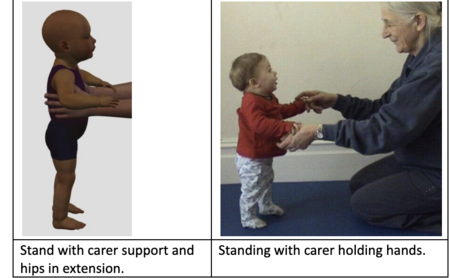 At this stage, the infant takes great pleasure in standing, and will often flex and extend their knees in a bouncing action. These repeated movements play a role in training the movement brain to use sensory input from the muscles and joints to adjust the amount of muscle force needed to maintain extension under varying circumstances.[9]

From 8-10 months, infants start to pull themselves up into standing with hand support, initially by pulling with the upper limbs and extending the lower limbs. With practice, they learn to rise to standing through half-kneeling.[10]

Standing with hand-support, learning to balance and reach[edit | edit source]

Once in standing, infants will shift their weight from side-to-side and start to figure out how to balance when lifting one hand to reach for a toy.

They learn to lift one hand and reach to the side, initially for toys and other interesting objects within easy reach, then to toys that are just out of reach. They also learn to reach upwards and backwards.

Learning to balance in standing with hand support[edit | edit source]

Once infants have learned to pull themselves into standing with support, they spend time exploring the best way to maintain balance when reaching for a toy or turning to look in different directions.

This exploration of weight shift and trunk alignment to maintain balance is facilitated by the infant’s desire to lift one hand and reach for toys.

Initially, they experiment with different ways of distributing their weight when lifting one hand. Two patterns of weight distribution are seen, namely an ipsilateral and a contralateral pattern.

When one arm is lifted, weight is shifted onto the contralateral hand and lower limb. This is an unstable pattern as the side-to-side base of support is narrow, and infants easily fall sideways if they shift their weight too close to the lateral edge of their base of support (BOS).

Infants who actively explore redistributing their weight in different ways soon discover that the most stable pattern when one hand is lifted, is to redistribute their weight onto their ipsilateral lower limb and contralateral hand. Pam Versfeld calls this the cross-over pattern.[11]

Along with learning to use a cross-over pattern of weight distribution, infants also need to learn to keep their trunk and lower limbs vertically aligned.

Reaching far to one side is sometimes accomplished by moving the trunk to the same side.

With repeated practice, infants learns to make small steps sideways to move the BOS vertically below the COM .

Infants also learn to reach down to grasp toys.

Often they start by bending at the hips and tipping their trunk forwards. With practice, they learn to flex their hips and knees as they lean forwards to reach for a toy on the floor.

Cruising differs from stepping in that the infant takes a series of steps with a defined stance and swing phase for each lower extremity.

Repositioning of the hand on the support surface is synchronised with the lower limb movements in an antiphase manner. With experience, this antiphase coordination improves and speed increases.

Infants learn to coordinate their limb movements to allow them to traverse across gaps of ever increasing size.

This antiphase movement of the upper and lower limbs is the same as seen in crawling. However, recent research by  Ori Osmy and Karen Adolph[12] from New York University has shown that the emergence of well coordinated antiphase cruising is not influenced by crawling experience and competence. It is, however, influenced by the infant’s experience of cruising and the structure of the environment, such as height and type of support surface and gaps between support surfaces.[12]

An infant's first experience of sitting down from standing happens when they lose their balance and fall down. With experience, they learn to sit down by moving their buttocks backwards and tipping their trunk forwards, so that they land in a sitting position.

With practice, infants also learn to flex their hips and knees and tip their trunk forwards and lower themselves to a squat position and then sit from there.

The next skill infants acquire, from about 10.5-13 months, is to let go of the support surface and stand independently without support for brief periods.[13][3]

This is followed by taking a few steps forwards. Steps are quick, short and the base is wide.

An important aspect of maintaining balance in sitting and standing is integrating and weighting the sensory information from different sources (touch, proprioception, vestibular and visual) needed for estimating the position of the body as a whole. This integration is reflected in the presence and extent of postural sway.

Carpenter et al.[14] suggest that postural sway may be used by the central nervous system as an exploratory mechanism to ensure that continuous dynamic sensory inputs are provided.[14]

Squatting and standing up from the floor[edit | edit source]

Once they can stand independently, infants also learn to squat down and stand up again with controlled flexion and extension of the knees and start to play in squatting. They learn to stand up from sitting by first getting up.

Once infants can stand independently, they start to take small steps forwards. The age of onset of walking is very variable, with typically developing children starting to walk any time from 11-14 months.[3]