The Alberta Infant Motor Scale (AIMS) is a standardised observational examination tool used to assess the maturation of gross motor skills of infants in the first 18 months post-term. The AIMS was developed as a reference guide for normal development of infants based on the age related norms of 2200 infants in Alberta, Canada.[1][2]

It can be used as a screening tool to detect and track early developmental delays.[3] [4] The tool compares the level of motor development against the expected norms for their age in four categories: prone, supine, sitting and standing. 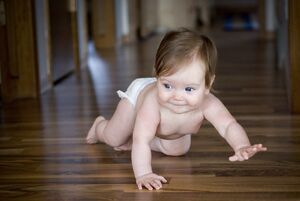 The AIMS should NOT be used for infants who use altered movement patterns to compensate for functional limitations (e.g., paralysis, spina bifida, hypotonia, muscle spasticity) as their unique motor development improvements may not be reflected in the AIMS.[2] 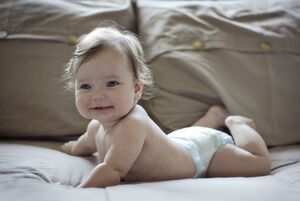 The AIMS is a 58-item observational scoring tool. These 58 items are divided into four position-centric sub-scales[1]:

The assessor should familiarise themselves with the administration and scoring guidelines of the Alberta Infant Motor Scale prior to conducting the assessment. The assessment takes a maximum of 20-30 minutes to complete. The assessor observes the motor functional patterns of the patient and compares them to the scale sheet.[1][2] 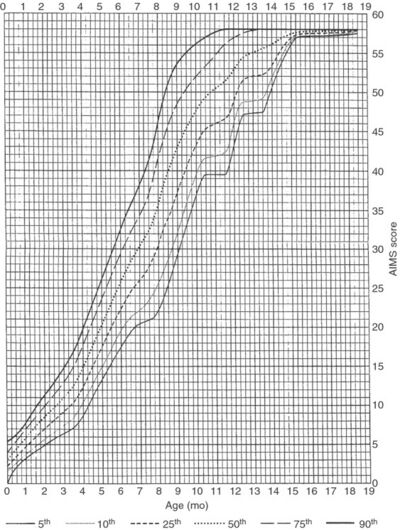 It is advised that the assessor completes the scoring after the assessment has finished. The scoring sheet is comprised of a photo and a short description of the movement to be assessed.[2] The movements begin with the most basic presentations of prone lying, supine lying, sitting, and standing and progress to more advanced movement, incrementally.[1]

During the assessment, the evaluator observes the movements of the child and scores each movement component as either “observed” or “not observed”. There is no option to score the patient on ‘emerging’ movement patterns. The patient should not be accredited for items reported by the parent/guardian. The least advanced and most advanced movements observed in a given position (prone, supine, sitting, standing) create the ‘motor window’ for the patient in that position. All movements within the motor window for each position must be recorded as "observed" (O) or "not observed" (NO). [2]

The assessor scores the patient one point for each movement that was “observed” within each motor window. The accumulative score of all four positions provides the 'total score'. The total score is recorded against the corrected gestational age of the patient on a graph of normative data for infant motor function. The graph in Figure 1 contains the percentile (5th, 10th, 25th, 50th, 75th, 90th) norms of infant motor function. The assessor determines at which percentile of motor development the patient is for their age based on the graphed normative values and records it on the scoring sheet.[1][2]

The data used to develop the AIMS was taken from 2202 infants younger than 18 months who were living in Alberta, Canada between 1990 and 1992, who were assessed to determine the typical development of infants at given ages.[1]

In 2014, twenty years after the initial normative data was published, developmental norms were reassessed in 650 Albertan infants over a two year period.[7] This was due to concerns of motor development delays resulting from the widespread implementation of the 'back to sleep' campaign and due to the changes in ethnic diversity in Alberta in the 20 years since initial norms were established.[8][9] The researchers of this review reported a correlation coefficient of 0.99 between the two distinct populations, concluding that the validity of the initial research remained unchanged.[7][10]

However, some researchers have investigated the normative development of infants in various countries around the globe using the AIMS. Results from these studies have formed population-specific normative values for several of these countries, such as Netherlands[11], Brazil[12][13], Serbia[14], Korea[15], Greece[16], Poland[17], Spain[18], Thailand[19], and Taiwan[20].

The inter-rater and intra-rater reliability has been investigated in several studies. All findings support high reliability in the use of the AIMS.[2][3][21][22]