Joint Line Tenderness of the Knee

The Joint Line Tenderness (JLT) test is a physical examination test commonly used to screen for sensitivity related to meniscal injuries.[1] [2] The test can be used if pain is localised to either the medial or lateral aspect of the joint. This is suggested to correlate with degenerative pathology of the articular joint cartilage or compromised integrity of the medial or lateral meniscus. [3]

A person with JLT has joint pain that increases when pressing on the surface of the joint or moving the joint through its normal range of motion. [4] Symptoms that may coexist with joint tenderness are joint stiffness, joint swelling, joint redness, joint warmth, joint pain and joint deformity.[4]

The knee is the largest joint of the body, consisting of the patellofermoral and the tibiofemoral joint. [6] The latter contains two menisci, a medial and lateral meniscus located between the corresponding femoral condyle and tibial plateau. The meniscus is a shiny-white tissue comprised of specialised extracellular matrix molecules. Each of them has a region-specific innervation and vascularisation. Both menisci are critical for a well-functioning knee joint.[7]

Each side of the tibiofemoral joint line is palpated separately to evaluate the maximal joint line sensitivity, i.e. the palpated point from the joint line that gives discomfort and is more tender than the unaffected leg at the same anatomic location.[5][7]

The test is positive if the patient experiences pain or tenderness during palpation of the medial or lateral joint lines.[5][7]

The sensitivity of a test is the proportion of people having the disorder who show a positive test result, and who actually have the disease or dysfunction i.e. A/(A+C) in Table 1.[10] For the joint line tenderness test, sensitivity can be described as the ability of the test to correctly identify those individuals with JLT having a meniscal tear.[11] On the other hand, the specificity of a test shows the proportion of people not actually having the disorder and showing a negative test result i.e. D/(B+D) in Table 1.[10] In other words, this is the chance of a negative outcome of the JLT in a person who does not have a meniscal pathology.[11] 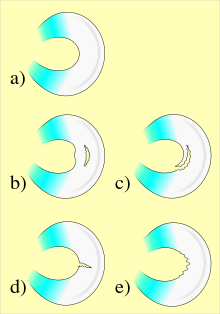 The specificity and sensitivity of the JLT test is suggested to be high in general and thus,the diagnostic accuracy of the test is high. However, the scores of the test for the lateral meniscus are suggested to be significantly higher than the scores of the test for the medial meniscus. In a study by Osman,[2] the medial sensitivity was 86% and the specificity 67%, in contrast to the lateral sensitivity 92% and specificity 97%.  This has also been confirmed by other authors.[13][14] In a similar way, the LR for the lateral test scores are higher than the medial test.[14] Therefore, a positive correlation has been found between JLT and meniscal lesions with a high sensitivity but a relatively lower specificity i.e. patients with JLT may not exclusively have meniscal tears, especially medial meniscus tears. [11][13] The accuracy of JLT predicting meniscal pathology also decreases in the presence of an anterior cruciate ligament tear. [1]

The use of the JLT as a stand alone test is not advocated in the clinical decision making process to guide treatment.[15] [16]During a physical examination, when JLT is used along with other tests such as the McMurrays test and the jointline fullness, the accuracy of clinically diagnosing of meniscal tears improves.[17] Physical examination and clinical meniscus tests in addition to a well taken history are considered important when diagnosing a meniscal tear, and may prevent further expensive investigations such as the MRI. [18] [19]For a well done taken anamnesis, we refer you to ’het gezondheidsprofiel’ of P. Vaes. [20] JLT has been reported to be the most sensitive but the least specific meniscus test.[13] This is because it has the highest rate of sensitivity compared with the McMurray test, the Apley’s test, the Ege’s test and the Thessaly test which reviews pain on forced extension.[2][13][21]

JLT has a lower rate of overall accuracy (83%) compared with other tests but is has a higher rate of accuracy in lateral meniscus compared with medial meniscus (93%).[13][21] However, all tests, except for the Ege’s test and the Thessally test, are performed in non-weight-bearing positions whereas most of the symptoms of a torn meniscus occur during weight bearing activities.[13] Ege’s test and the Thessaly test, which have compression with weight bearing or clinician-applied axial rotation, were found to have the strongest diagnostic accuracy but with smaller samples in the studies.[13][22]

When the JLT is compared to the Ege’s test and the McMurray test, there is no statistically significant difference between the three tests in detecting meniscal tears. JLT and Ege’s tests are the most accurate tests for medial meniscus tears but the specificity of the Ege’s test is higher.[13] Some studies show a lower sensitivity for the McMurray test than for the joint line tenderness test in diagnosing meniscal tears,[2] but others don't. [23] The JLT has also been compared to the McMurray and the Apley’s test with similar results. JLT has a higher sensitivity but the specificity values were larger with Apley’s test compared to JLT and McMurray’s test. [13][22]

The Joint Line Tenderness (JLT) is a physical examination test commonly applied alongside other tests such as the McMurrays test and the jointline fullness to screen for the diagnosis of meniscal injuries. The sensitivity of the JLT test is suggested to be high in general but specificity is relatively lower. In other words, patients with JLT may not exclusively have meniscal tears, especially medial meniscus tears. Furthermore, the value of the JLT predicting meniscal pathology is lower in the presence of an anterior cruciate ligament tear. Physical examination and clinical meniscus tests in addition to a well taken history should be used when diagnosing a meniscal tear, and may prevent further expensive investigations such as the MRI.