Neurophysiology is the branch of physiology dealing with the functions of the nervous system. ie The study of the functional properties of neurones, glia, and networks.

Below you will learn all about

An ion channel is a protein macromolecule that crosses the breadth of a membrane and allows molecules to pass through. The ions move in a direction determined by the electrochemical gradient across the membrane.

Some channels respond to chemical stimulus (particularly at the synapse). These channels have specific receptors for that chemical, that leads to channel opening. 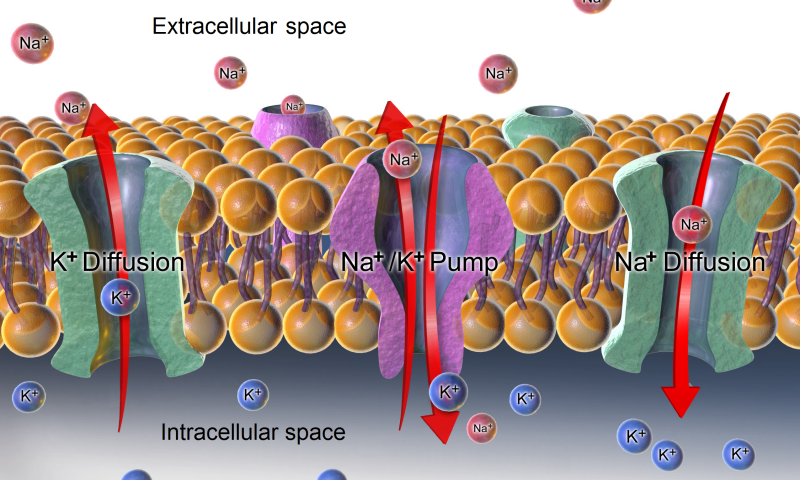 The resting membrane is relatively impermeable to Na+ ions, while remaining permeable to K+ ions. So when the membrane is at rest, there will tend to be an efflux of K+ ions out of the cell, down its concentration gradient, leaving excess negative charge behind. This continues until the chemical concentration gradient that is driving out the K+ from the cell is exactly at the point where it is offset by the electrical potential difference generated by this efflux. (the membrane potential) K+ is then drawn back into the cell.

This steady state of the membrane is called the Equilibrium Potential.

The equation for deriving the equilibrium potential is called the Nernst equation.

There is actually a slightly unexpected increased positive charge in axons due to a small permeability to Na+ ions of the membrane in the resting state. This is offset by ATP dependent Na+/K+ exchange pump. I pumps out 3 Na+ ions for every 3K+ ions brought in to the cell. However, it makes only a tiny contribution to the resting membrane potential of the cell.

Defined as a "single electrical impulse passing down an axon".

It is all or nothing in its action. This means that once the threshold stimulus intensity is reached, an action potential will be generated.

Information in the nervous system is coded and interpreted by the frequency of firing, not by the size of action potential.

Threshold Stimulus Intensity: The value at which the net inward current(determined by Na+ ions) is just greater than the net outward current (carried by K+ ions). It is normally -55mV (critical firing threshold)

The AP most readily occurs at the axon hillock because this is where there is a greater density of Na+ ion channels. It is for this reason that this is the site of AP initiation in the neuron.

If the threshold is not reached, the action potential will not be generated, and transmission of the signal is terminated at that point.

Sequence of events for an Action Potential to be generated 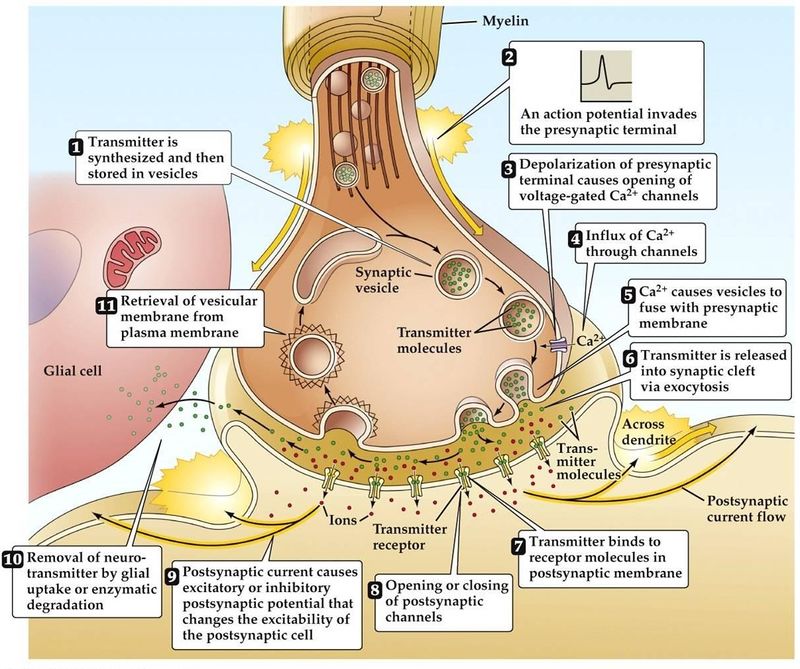 The nerve is insulated with myelin if its size is above a certain diameter, with the Nodes of Ranvier at various intervals along its length.

Action potential  leads to depolarisation of the membrane immediately in front (and behind). The membrane is in a refractory state, so the action potential is only conducted in 1 direction. This is feasible in small axons, but the spread of current is slow.

Same sequence of events as in the unmyelinated axons. There is however a significant difference. The progressing action potential encounters high resistance, low-capacitance structure - myelin wrapped around the axon. The depolarising current passes along the axoplasm, until it reaches the low resistance Node of Ranvier with its large amount of Na+ channels. The action potential is then generated at this site. Action potential is conducted from node to node. This is called Saltatory Conduction.

Most nerves greater than 1 micron are myelinated.

Disturbances in conduction are normally due to demyelination pathologies. They include Guillan Barre syndrome and Multiple sclerosis.

Each central neuron receives many hundreds of synapses. Each of these inputs is than integrated into a response by that particular neuron. This involves processing all the inputs that arrive at any one time. This is called spatial summation. Processing inputs over a set period of time is called temporal summation. There will be a mix of excitatory and inhibitory synapses acting at this point.

The neurotransmitter is released at the synapse and works with a specific protein in the postsynaptic membrane called the receptor. In some synapses the neurotransmitter may also be found to interact with a presynaptic autoreceptor. The PSA acts as a regulator of the amount of transmitter released.

Receptors for specific neurotransmitters may be either coupled directly to ion channels or to a membrane enzyme where the binding of the neurotransmitter to the receptor either opens an ion channel via an intracellular enzyme cascade or indirectly modulating the probability of other ion channels opening in response to voltage changes. (neuromodulation)

Activated receptor can only return to its resting state once the neurotransmitter is removed by the process of enzymatic hydrolysis (uptake) into the presynaptic nerve terminal or into the nearby glial cells.

Desensitisation/Down regulation: A decrease in affinity of the receptor for the transmitter in the short term, in the longterm, this leads to a decrease in the number of receptors.

Supersensitivity/Up regulation: An increased affinity of the receptor for the transmitter in the short term can lead to an increase in channels in the longterm.

There are a large number of Neurotransmitters:

In addition, over 50 neuroactive peptides have been found, and new ones are discovered regularly. Many of these are "co-released" along with a small-molecule transmitter. Nevertheless, in some cases a peptide is the primary transmitter at a synapse. β-endorphin is a relatively well known example of a peptide neurotransmitter because it engages in highly specific interactions with opioid receptors in the central nervous system.

Single ions (such as synaptically released zinc) are also considered neurotransmitters by some, as well as some gaseous molecules such as nitric oxide (NO), carbon monoxide (CO), and hydrogen sulfide (H2S). The gases are produced in the neural cytoplasm and are immediately diffused through the cell membrane into the extracellular fluid and into nearby cells to stimulate production of second messengers. Soluble gas neurotransmitters are difficult to study, as they act rapidly and are immediately broken down, existing for only a few seconds.

The most prevalent transmitter is glutamate, which is excitatory at well over 90% of the synapses in the human brain. The next most prevalent is Gamma-Aminobutyric Acid, or GABA, which is inhibitory at more than 90% of the synapses that do not use glutamate. Although other transmitters are used in fewer synapses, they may be very important functionally: the great majority of psychoactive drugs exert their effects by altering the actions of some neurotransmitter systems, often acting through transmitters other than glutamate or GABA. Addictive drugs such as cocaine and amphetamines exert their effects primarily on the dopamine system. The addictive opiate drugs exert their effects primarily as functional analogs of opioid peptides, which, in turn, regulate dopamine levels.