Idiopathic toe walking (ITW) is a diagnostic term used to describe a condition in otherwise healthy, ambulant children who present with a toe-toe gait. It is a diagnosis of exclusion, where no determinable pathology exists.[1]

Toe walking itself occurs in the absence of heel strike during initial contact together with the absence of full contact of the foot during stance phase in the gait cycle. Weight is kept primarily on the forefoot, often on the metatarsal heads.[1] [2]

An operational definition given by Dilger [2] is “an equinus gait, initially without fixed contractures, with passive dorsiflexion range of motion (ROM) of the plantar flexor musculature to dorsiflex to at least neutral (0°) with the subtalar joint inverted and with the knee extended."

While some patients who present with ITW do so 100% during gait, some are able to spontaneously move to a heel-toe gait pattern. [3]

Reports of the incidence of ITW vary considerably. From 7%-24% [5]to between 2% - 5%[3][6]This is seen in part because much of the literature views toe-walking as part of normal gait development in children under the age of 2 years[1] 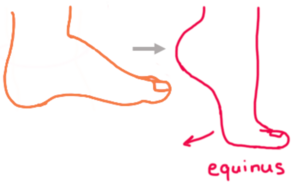 Children diagnosed with ITW also often present with ankle equinus and/ or limited range in the ankle plantar flexors. Initially, this was thought to be a causational factor, but in more recent studies it is thought to be more a result of ITW. [1]

When it was initially described in the 1960's a genetically inherited trait was attributed to its development.[2]

Another, more recent school of thought is that ITW is a product of hyperreactivity of reflexes; an adaption to sensory feedback.[6] It has been hypothesized that a delay in maturation of the corticospinal tract results in a lack of inhibition of the stretch reflexes and subsequent increased deep tendon reflexes. The literature review performed by Lorentzen et al.[6] found that corticospinal pathways are active and important at the level of the presynapse of motor neurons of the ankle plantar flexors.

In regard to the feedforward mechanisms, dysregulation in sensory integration has been hypothesized. Sensory integration is "the registration and modulation of sensory input for the execution of motor output". [2](p.4) Examples of disrupted regulation can be viewed with hypertonia, leading to decreased proprioceptive and vestibular input, and thus altered biomechanics, seeking further input through the metatarsal joints. On the opposite end of the spectrum, tactile defensiveness resulting from the input which is perceived as too much or noxious could also result in toe walking gait.[2]

While there is no known cause for ITW, it has been associated with other conditions including developmental delay, cognitive delay, and children diagnosed as having autism spectrum disorder (ASD).[1][2]

While the etiology of ITW remains unclear, there is consensus that as the child progresses in age, certain biomechanical changes occur. This includes shortened tendon achilles, as well as contractures of the foot and ankle joints. This is more prominent in older children presenting with ITW [3][1][2]

Muscle biopsies done also indicate a higher percentage of type I muscle fibres in the gastrocnemius muscle than what would be expected.[2] [6]

Diagnosis is one of exclusion. Hence the differential diagnosis is used. The following is a list of diagnoses to rule out:[1][7]

The Toe-walking tool is a series of questions that is claimed to be a valid and reliable tool for distinguishing ITW from other conditions.

Despite no known cause, studies have shown persistent gait kinematic and EMG abnormalities, even when attempting heel-toe walk. [3] In studies done with EMG, it was ascertained that the gastrocnemius and tibialis anterior (TA) were out of phase, or imbalanced. Early and predominant firing was noted in the gastrocnemius muscles during the swing and stance phase. In addition, low amplitude of TA was noted during both stance and swing. These results showed some evidence of the ability to diagnose ITW through EMG[3] [1]Caution must be used when considering this as a form of diagnosis. The study performed by Dilger[2]showed similar firing patterns to that of children diagnosed with mild cerebral palsy.

Initial management is conservative, with some of these treatment regimes including Botulism Toxin A (BTX). Surgical intervention is usually undertaken when conservative measures have been exhausted.[3] [1][7]

Conservative treatment can include the following[7]:

Surgical interventions described in the literature include:

As with all therapeutic interventions, initial consult begins with a thorough assessment, followed by treatment and reassessment.

Components of a physical therapy examination history are detailed in the Cincinnati Children’s Hospital Medical Centre’s Guideline in the Management of Idiopathic Toe Walking.[3] It includes the following:

Further details in progressive reassessment during follow-up consultation can be found in the Cincinnati Children’s Hospital Medical Centre’s Guideline.

A physiotherapist's role in the management of ITW is multidimensional and includes the following[2].