The Functional Movement Screen (FMS)[1][2], and later the Selective Functional Movement Assessment (SFMA)[3], was developed to help clinicians and health care professions screen individuals for risk of injury and / or a dysfunctional or performance-limiting movement pattern. The FMS was first presented commercially as a manual for screening athletes and the product line was later expanded to include a range of equipment for performing the screen, certifications for those screening athletes, seminars, books, and videos.[4]

The FMS is a tool used to identify asymmetries which result in functional movement deficiencies. The FMS aims to identify imbalances in mobility and stability during seven fundamental movement patterns. These movement patterns are designed to provide observable performance of basic locomotor, manipulative and stabilising movements by placing an individual in extreme positions where weaknesses and imbalances become noticeable if appropriate mobility and motor control is not utilised. Once these deficiencies have been identified through the FMS, a program of corrective exercises is then developed with the goal of preventing musculoskeletal injuries.

The FMS was intended to serve as a screen to identify individuals with functional movement deficits that could indicate an increased risk of injury. Use in the literature varies from young, active individuals to middle-aged individuals, elite, collegiate and professional athletes, as well as military and firefighters. A lower FMS scores have been noted to be associated with an increased BMI, increased age, and decreased activity level.[5]

A score of <=14 on the FMS is used as the cut-off score. Individuals who score less than 14 points on the FMS screen have greater odd for sustaining an injury [6]. Research to date is limited and it is not yet clear for which sports or professions the FMS is optimal in predicting injury risk, and whether the original cutoff score of <=14 is valid in different populations [7]. Evidence

Multiple studies have demonstrated excellent reliability of the FMS screen.[7][8][9][10] A recent study by Teyhen et al [7] revealed that among novice raters, the FMS demonstrated moderate to good inter-rater and intra-rater reliability, even with minimal training (4 hours).

Although there is preliminary research by Kiesel et al [6] that suggests that NFL (National Football League) players who score <= 14 on the FMS had a positive likelihood ratio of 5.8 to sustain a time-loss injury. There are concerns remaining regarding the validity of the FMS[10][11]. Moran et al[12] suggest that the strength of association between FMS composite scores and subsequent injury does not support its use as an injury prediction tool. Further more, Alemany et al[13] suggest that pain occurrence may be a stronger indicator of injury risk than a low composite score and provides a simpler method of evaluating injury risk compared to the full FMS.

Many clinicians confuse the Functional Movement Screen tool with the Selective Functional Movement Assessment (SFMA). Both tools are a part of the same Functional Movement System created by Cook and colleagues, but their fundamental purposes are quite different. The SFMA is meant to be used in a diagnostic capacity, designed to identify musculoskeletal dysfunction among individuals affected by pain. Whereas the FMS is a screening tool, not intended for diagnosis. The FMS aims to identify imbalances in mobility and stability during functional movements. 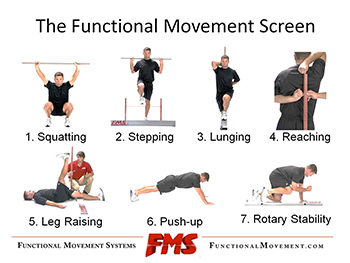