Erb's palsy or Erb–Duchenne palsy is a form of obstetric brachial plexus palsy. It occurs when there's an injury to the brachial plexus, specifically the upper brachial plexus at birth. The injury can either stretch, rupture or avulse the roots of the plexus from the spinal cord[1]. It is the most common birth-related brachial plexus injury (50- 60%).[2]

It is a lesion of C5 & C6 nerve roots (in some cases C7 is involved as well) usually produced by widening of the head shoulder interval. Injuries to the brachial plexus affects movement and cutaneous sensations in the upper limb. Depending on the severity of the injury, the paralysis can either resolve on its own over a period of months, require rehabilitative therapy or surgery.[1] 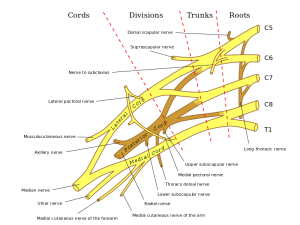 Neurologically, the Erb's point is a site at the upper trunk of the Brachial Plexus located 2-3cm above the clavicle[3]. It's formed by the union of the C5 and C6 roots which later converge. Affected nerves in Erb's palsy are the axillary nerve, musculocutaneous, & suprascapular nerve.

Incidence of permanent impairment is 3-25%. The rate of recovery in the first few weeks is a good indicator of final outcome. Complete recovery is unlikely if no improvement has occurred in the first two weeks of life.

A study by Weizsaeker et al 2007 found that being a member of the black population was independently predictive for Erb's palsy.[6]

The classical sign of erb's palsy is called Waiter's tip deformity. This is due to loss of the lateral rotators of the shoulder, arm flexors, and hand extensor muscles.  The position of the limb, under such conditions, is characterized by : the arm hanging by the side and is rotated medially, the forearm extended and pronated and the wrist flexed. Also, there is loss of sensation in the lateral aspect of the forearm.

The arm cannot be raised from the side; all power of flexion of the elbow is lost, as is also supination of the forearm. Muscles most often affected, by either partial or total paralysis, are supraspinatus and infraspinatus. This occurs because the suprascapular nerve is fixed at the suprascapular notch, with the injury observed at Erb's point (described above). In more severely affected patients deltoid, biceps, brachialis, and subscapular are affected (C5 and C6). Elbow flexion is weakened because of weakness in biceps & brachialis. If roots are damaged above their junction, paralysis of rhomboids and serratus anterior is evident, producing weakness in retraction and protraction of scapula

A thorough history and physical examination with focus on neurologic examination are used to confirm diagnosis.

Physical examination- most often shows decreased or absent movement of the affected arm.

It might also be important to look for presence of cervical rib. In the report by Becker J, et al (2002), the authors noted that in a series of 42 infants found to have a cervical rib, 28 newborns had an Erb's palsy. They concluded that a cervical rib was a risk factor for an Erb's palsy[9].

During the first 6 months treatment is directed specifically at prevention of fixed deformities. Exercise therapy should be administered daily to maintain ROM and improve muscle strength. Parents must be taught to take an active role in maintaining ROM and keeping the functioning muscles fit. Exercises should include bimanual or bilateral motor planning activities.

A systematic review suggests physiotherapy interventions like constraint-induced movement therapy, kinesiotape, electrotherapy, virtual reality and use of splints or orthotics have positive outcomes for the affected upper limb functionality in obstetric brachial palsy from 0 to 10 years.[17]

Encourage parents to carry out specific exercises with their child 2-3 a day in the comfort of their own home - although the exercises can be carried out anywhere appropriate and comfortable. The Home Exercise Programme may focus on the following[14][15][16]:

Surgical intervention is a possible treatment option and will be considered by the medical team after appropriate assessment[22][23]. Surgery is only considered when conservative treatment (such as physiotherapy) is deemed unsuitable[24]. This may be just after birth, as the severity of the BPBP injury requires surgical intervention, or it may be later in a child’s development. Surgery for BPBP can involve nerve transplants or tendon transfer of functioning muscles[25][26]. Many children show a complete recovery, but for those unfortunate not to recover fully, it is important to focus on helping a child to adapt to tasks and work on different strategies to complete activities in their daily life.

Dina Shafer, who also has a lasting disability affecting her right arm due to BPBP, has a Youtube channel showing how she carries out her activities of daily living such as driving her car and curling her hair as well as how she exercises at the gym where her workouts involve a range of different exercises from deadlifts to martial arts training.

There are also other inspiring individuals out there, including Emily Langridge, a young woman with BPBP who created a documentary following families, adults and children with the condition. Watch the film on the website of the Brachial Plexus Palsy Project.

Indications for surgery is no clinical or EMG evidence of biceps function by 6 months. This represents 10% to 20% of children with obstetric palsies.

The three most common treatments for Erb's Palsy are: Nerve transplants (usually from the opposite leg), Sub Scapularis releases and Latissimus Dorsi Tendon Transfers.

Nerve transplants are usually performed on babies under the age of 9 months since the fast development of younger babies increases the effectiveness of the procedure. They are not usually carried out on patients older than this because when the procedure is done on older infants, more harm than good is done and can result in nerve damage in the area where the nerves were taken from. Scarring can vary from faint scars along the lines of the neck to full "T" shapes across the whole shoulder depending on the training of the surgeon and the nature of the transplant.

The prognosis is dependent on the severity of injury, timing of treatment- the earlier, the better the results and associated injuries (fractures of shoulder/arm). Mild cases of erb's palsy may resolve in three to six months with physical therapy. Erb's palsy resolves completely in the first year of life in approximately 70%- 80% of patients and nearly 100% if treatment begins in the first four weeks of birth.[27] Also, effective hand grasp during treatment is associated with good prognosis.