Duchenne muscular dystrophy (DMD) is an X-linked recessive disorder caused by a lack of dystrophin, and has an overall incidence of 1 in 4700 male births.[1][2] The progressive character of the disease is due to muscle wasting and its replacement by connective tissue.[3] Muscular dystrophy is characterized by progressive muscular weakness, from childhood, which eventually results in the loss of gait performance when patients are approximately 10–12-years-old.[4] These changes lead to weakness, which will first affect the proximal muscle groups and the distal ones on a later stage, all of those compromising the child's posture and gait. It is very important that the physiotherapist keep an eye on the dynamic quantitative assessment of gait in patients with Duchenne Muscular Dystrophy as this would help in evaluating the progression of the disease and to adapt any appropriate therapy.[5] 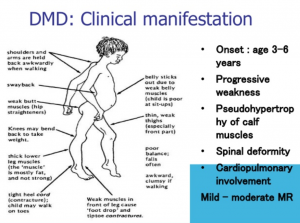 Diagnosis typically begins in early childhood after suggestive signs and symptoms are noticed, such as weakness, clumsiness, a Gowers’ sign, difficulty with stair climbing, or toe walking. Prompt referral to a neuromuscular specialist, with input from a geneticist or genetic counselor, can avoid diagnostic delay.[6]

The North Star Ambulatory Assessment (NSAA) and timed function tests are foundational clinical assessments of function during the ambulatory period and should be done every 6 months.[7],[8]

The Bayley-III scale of infant development and Griffiths Mental Development Scales measure the rate of development in children, and both have the ability to highlight early developmental delays in children with DMD.[9] The NSAA, with revision, can be used to test children as young as 3 years.[10] Hip kinematics during gait are clinically meaningful outcome measures at 4–8 years.[11]Other measures assessing antigravity function, considered exploratory in DMD, include the Alberta Infant Motor Scale, Hammersmith Functional Motor Scale Expanded, and the Gross Motor Function Measure.[12]

Many studies are showing evidence of proximal weakness affecting the muscle groups first and then followed by distal weakness. As this is true for both upper and lower limb muscles we are going to focus on the lower limbs only and the characterization of the Duchenne Gait. The first evident compensations are due to gluteus maximus weakness and tightness in the hip flexors.[13]. The consequence of this is development of lumbar lordosis, an excessive anterior pelvic tilt and a 'double bump' sagittal pelvic tilt.[13]D'Angelo, M. G., et al. (2009). "Gait pattern in Duchenne muscular dystrophy." Gait Posture 29(1): 36-41</ref> Muscle wasting in the quadriceps is affecting the knee movement in loading response, when patients trying to avoid flexion of the knee. Furthermore, the knee hyperextension later in stance might be due to an attempt to keep the body stable while compensating for the weak quadriceps. D'Angelo et al., demonstrated this in their study by showing absence of extensor knee movement in patients with DMD.

Looking at the distal parts of the lower limb, it has been found that there is an excessive foot plantarflexion during swing phase and this was due to compensatory movement in the flexors and abductors of the hip, in order to aid floor clearance. However, velocity and cadence in this population group is similar to those in healthy subjects but stride length is known to be reduced and step width increased.[13]D'Angelo, M. G., et al. (2009). "Gait pattern in Duchenne muscular dystrophy." Gait Posture 29(1): 36-41</ref> It is expected the gait pattern to get more severely affected once the children start developing ankle tightness and contractures of the hips.

Prevention of contracture and deformity requires daily passive stretching of joints, muscles, and soft tissues at risk of tightness; support of movement by decreasing the effects of gravity and optimizing biomechanics to allow more active movement; manual therapy techniques and prolonged elongation of soft tissues; and optimal positioning, including individualized use of splinting, orthotic interventions, standing devices, serial casting, and custom seating and power positioning components in mobility devices.[14]

Other Similar Conditions to Duchenne Gait