Significant development can be seen between the 1-2 month old infant stage.  As infants stay awake longer and become more alert, their behaviour becomes less spontaneous and more intentional allowing them to interact within their physical and social environment.[1]

During the first two months of life, generalized body movements are characterized as writhing (forceful and tense) in appearance involving the entire body.[1] [2] Speed and amplitude of movement range from low to moderate and are varied and complex. [3] Around two months old, movements transition from writhing to fidgety.  These complex and varied movements are characterized by variable acceleration, small amplitude and moderate speed.[1]  [2][3]  The presence and character of fidgety movements are good indicators of the integrity of the infant's nervous system.[1]

In contrast, abnormal findings during this phase include:

Hadders (2017)[2] has a nice depiction of normal baby movements compared to abnormal movements during this stage. To see these images, please go to https://onlinelibrary.wiley.com/doi/full/10.1111/dmcn.13540

Self-perception is the ability to sense one’s own body either through proprioception (moving head and limbs in space) or haptic (touching a surface).  Newborns display an early sense of their body and personal space which allows them to navigate their social and physical world. During these first two months, newborn vision is poor limiting their understanding of the world outside their personal space. Motor and sensory experiences are thus predominantly centred around their body. Exploratory and repeated movements and postures provide self-knowledge about their body.[4]

In 1992 the American Academy of Pediatrics recommended babies be placed supine to sleep due to the high incidence of sudden infant death syndrome (SIDS).  This has significantly reduced SIDS cases by 40%, however, babies showed slower achievement of motor milestones. To discourage motor delay, parents are encouraged to provide tummy time 30 minutes a day for physical activity.  Tummy time is awake prone playtime on the floor supervised by an adult.  Unfortunately, tummy time recommendations are followed by only 30% of parents despite the positive association with prone playing and gross motor development.[5]  Research studies reveal significant differences in prone and nonprone infants in achieving the following gross motor development milestones[5]: 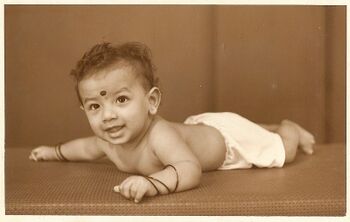 Infants 1-2 months old gain increasing control over trunk position in sitting with support at the hips.[1] With support at their hips, they can maintain a semi-erect position of their trunk.[1] Musculature synergies that are direction-specific control posture by adapting to the varied situations.  When an infant leans forward, the dorsal muscles are activated to maintain balance.  As the infant performs goal-directed tasks such as reaching, the body sways to preserve stability.[6]

Infants in this stage attempt to reach for objects by using large range swiping movements of the upper extremities.  Their hands will come close to the object, but mostly they do not make contact.  The elbows and fingers are seen in extension during these swiping motions.  Towards the end of this period, the newborn gains more control of reaching as they can steady their head and trunk better when moving their upper extremities.  This new postural control allows their hand to come into contact with the toy allowing for exploration of the object. [1]

Initially when reaching for objects infants used a closed fist.  Around 4 months old, infants will transition to an open hand in anticipation of contacting the object.  Research shows that reaching for an object is dependent upon location and age.  Provine and Westernman (1979)[7] demonstrated a success rate of reaching for an object by age in the following scenarios:

As the infant ages during the first year of life, their ability to reach in external space becomes faster and more efficient.  Reaching precedes grasping demonstrating a proximodistal sequence in development.[7]

Infants between 1-2 months old demonstrate social and communication behaviour in the following ways:

Infants involved in social interaction will make pre-speech sounds such as coos, squeals, grunts and vowel-like sounds.  Subsequently, mothers, fathers and caregivers communicate with infants using a higher pitch and slower speech rate referred to as “baby-talk” or motherese.  Studies show infants have a preference for this infant-directed speech by noting they are more responsive, look longer at the speaker and remember the speaker more often. Motherese can help maintain a positive adult-infant interaction by increasing the responsiveness from the infant to the speaker.[8]