The costovertebral joints describe two groups of synovial plane joints which connect the proximal end of the ribs with their corresponding thoracic vertebrae, enclosing the thoracic cage from the posterior side. 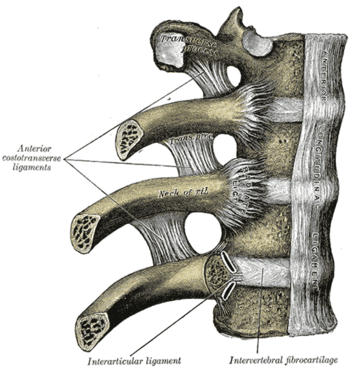 Joining of ribs to the vertebrae occurs at two places

Costovertebral joint consists of the head of the rib (the head of a typical rib has two facets - each facet with a separate synovial joint separated by a ridge. The head of each rib articulates with:

There are two types of ligaments: 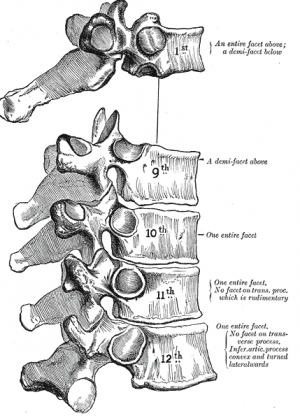 There are two facets of a tubercle of a rib, the medial and lateral.

The lower two ribs are only attached by ligaments and do not form synovial joints with the transverse process[2].

The movements on these joints are called ‘pump-handle’ or ‘bucket-handle’ movements, and are limited to a small degree of gliding and rotation of the rib head.

Muscles That Act on the Costovertebral Joints[edit | edit source] 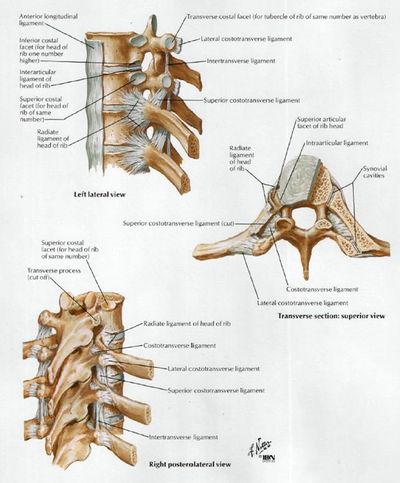 The prime movers of the costovertebral joints are the muscles of respiration.ie

However, all the muscles that attach to the ribs and which are sorted as accessory respiratory muscles can cause the movements on these joints;

Both types of costovertebral joints are innervated by the lateral branches of the posterior rami of spinal nerves C8-T11.