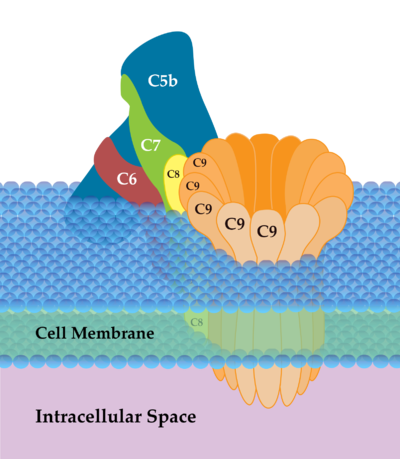 The complement system helps or “complements” the ability of antibodies and phagocytic cells to clear pathogens from an organism. It is part of the innate immune system.

The complement system consists of a number of small proteins found in the blood, made by the liver. Normally they circulate as inactive precursors. When stimulated by a trigger, proteases split these small proteins to release active cytokines. This starts a series (a cascade) of further cleavages which release more cytokines. This amplifies the response. So, if the original stimulus was an invading bacterium, the cytokines disrupt the phospholipid bilayer cell membrane of the target, which kills it [1].[2][3]

Complements are soluble proteins and glycoproteins, more than 20 types of complements are present in serum, found circulating normally in human body in inactive forms.

Complements are activated only during inflammatory reactions. During the inflammation, more amount of complements reaches to the interstitial area of the infected tissue through dilated blood vessels, which are then activated by proteolytic cleavage[1].

Image: Membrane Attack Complex (MAC) is the terminal complex of the complement system of the innate immune system. It forms pore-like holes in cell membranes, causing swelling that ultimately leads to cell death 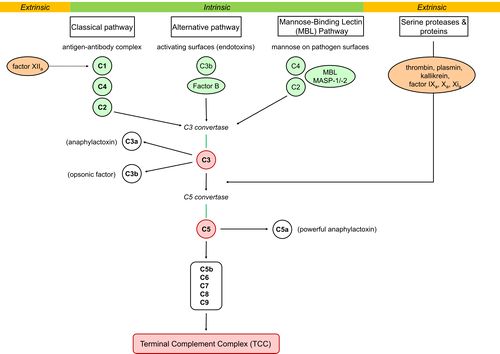 Complement proteins in the circulation are not activated until triggered by an encounter with a bacterial cell, a virus, an immune complex, damaged tissue or other substance not usually present in the body.

Although they differ in mechanisms, the commonly needed step of all pathways is the conversion of C3 to C3a and C3b; the latter is necessary for the formation of the membrane attack complex (MAC). 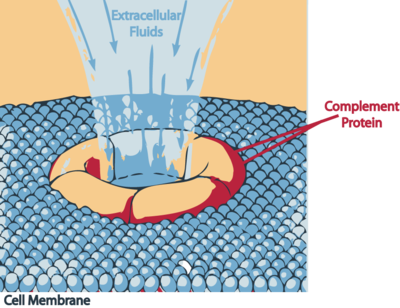 The complement system has the potential to be extremely damaging to host tissues; hence regulatory mechanisms are required to restrict the complement pathway. Various plasma and cell membrane proteins regulate complement activation by inhibiting different steps in the cascade[1].

The complement system is diffusely active within the body, and deficiencies or dysregulation results in immune system deficiencies, autoimmune disorders, or bleeding disorders[6].