Talipes Equino varus also known as clubfoot is a common congenital physical deformity which is untreated leads to severe lifelong disability. In Iraq there are an estimated 1728 new born babies with clubfoot per year. Clubfoot treatment is offered in Iraq both conservative and surgical method. Prior to 2014 the general practice for the treatment was the surgical method and the conservative method casting was done only for the babies less than 3 months of age. Due to lack of follow up and advice the incidence of relapse was high. In 2015 a Clubfoot clinic was started at Al Sader Hospital Najaf, where all the clubfoot cases are treated only by Ponseti method. The most challenging is the post-surgical relapse cases but still with Ponseti method a good result could be achieved. The following case study is an example.

Fatima Hassan, 5 years old girl was referred to Najaf clubfoot clinic with a relapse clubfoot deformity after receiving surgical treatment when she was 11 months old.

Fatima was born with clubfoot and she was treated at that time by multiple casts but without remarkable correction. At the age of 11 month, soft tissue release was done followed by brace but the deformity relapse after few months.

Few months back the mother brought Fatima to the clinic to get the foot corrected so that she can go to the school as a normal student without any difficulty.

All the elements of clubfoot deformity were present consisting of cavus, forefoot and midfoot adduction, heel varus and equinus.

A scar of previous surgery was found on the postero-medial aspect of the foot. The girl was healthy with no signs of neuro-muscular disorders at the time of reporting.

To present effectiveness of Ponseti method in the treatment of clubfoot with post-surgical relapse.

Detailed assessment was done followed by 6 sessions of serial manipulation and casting according to Ponseti principles. In each session foot was assessed according to the Pirani scoring system. At the 7th session percutaneous tenotomy of Achilles Tendon was done and the foot was casted for further three weeks followed by a foot abduction brace, an appropriate orthotic was provided. The mother was taught how to do stretching exercises of the corrected foot on removal of the splint.

After 7 sessions of Ponseti method, the clubfoot deformity of Fatima was corrected completely. The midfoot and forefoot was corrected to Pirani score 0 after 6 sessions. The hind foot was also corrected to Pirani score 0 after heel cord tenotomy and casting for 3 weeks. Fatima is on foot abduction brace since 18 months and will continue for coming 18 months. There is no sign of relapse till now. As a result now she is able to go to school without any difficulty. 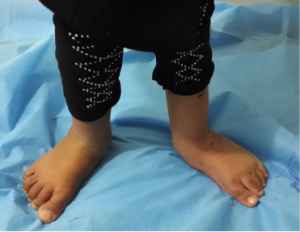