This term is outdated and not commonly used in clinical practice, although it may still be used in some parts of the world.

These symptoms may be related to vertebrobasilar insufficiency where interference with the blood flow in the vertebral artery occurs when the neck is inclined to one side, rotated or extended. 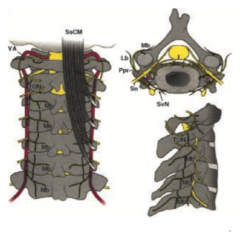 The upper cervical complex consists of the atlanto-occipital(jointC0-C1), the atlanto-axial (1joint-C2) and the superior aspect of C2.

The essential factors are:

Impingement on the vertebral artery and the sympathetic nerve near the cervical spine can be related to cervicocephalic syndrome. By stimulation of nociceptors in zygapophyseal joints, symptoms in nearby muscles and tendons can be stimulated. This impingement could be caused by malpositioned joints at the head/neck junction, deviations of the cervical spine from the body axis, displacement of vertebrae and constriction of the vertebral artery[2]

Cervical headaches affect approximately 2.5% of the adult population and comprise roughly 15 to 20% of all chronic and recurrent headaches. Headache and neck pain are the two most common complaints reported by patients with cervicocephalic syndrome. Other symptoms associated with the syndrome include dizziness, auditory disturbance and visual disturbance.

Cervicocephalic kinesthetic sensibility is a common complaint related to chronic neck disorders, mostly accompanied with a decreased postural balance. The ability to accurately recognise movements in the neck is reduced due to disturbed proprioception[2][4]
. 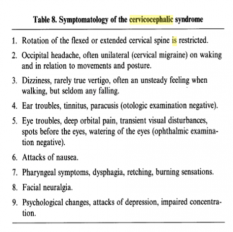 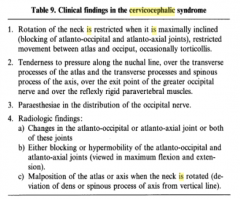 Many diseases cause headache therefore thorough evaluation and differential diagnosis is important. General causes of headache (e.g. metabolic disease, hypertension and visual disturbance) can be ruled out quite easily. CCS is sometimes incorrectly diagnosed as migraine but the two conditions differ in many ways. Common migraine differs from cervicocephalic migraine in duration of each attack as well as the corresponding symptoms such as vomiting and nausea. Other symptoms (dizziness and vestibular disturbances) related to cervicocephalic syndrome can be provoked or worsened by movements of the head and cervical spine, unlike symptoms associated with non-cervicogenic dizziness and vestibular disturbances.


Pathologies that may present similarly to cervicocephalic syndrome include; [3]

The Cervicogenic Headache Study Group established the following criteria for the diagnosis of CH: Provocation by head movements, maintenance of antalgic head posture and (partial) relief of pain by diagnostic blockade. Because CCS comprises of cervicogenic headache, the preconceived criteria are therefore of use in the diagnostic procedure of CCS. Complaints such as dizziness and vestibular disturbances arouse with certain head movement as said in previous subtitles. [1]

Patients who followed a proprioceptive rehabilitation programme improved a significant in controlling head repositioning accuracy compared with a control group who did not follow this program. However, it is not clear if the difference in reposition angle also has clinical relevance (2 degrees). Clinical parameters such as pain, analgesic intake, ROM and daily functioning are also improved significantly in the intervention group. 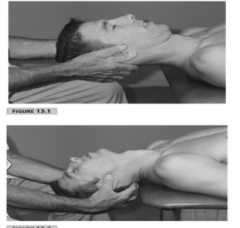 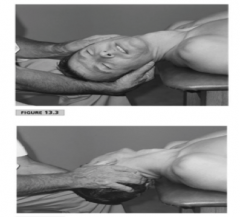 The sensibility of head orientation can be evaluated by relocating the head after an active movement. When performing this test, the patient is asked to relocate his/her head after an active rotation to the left and right.  When healthy persons and patients are compared, the patient group demonstrates significantly worse scores on this test. The validity and test-retest reliability demonstrate an excellent result for measuring the cervical proprioception[4]. 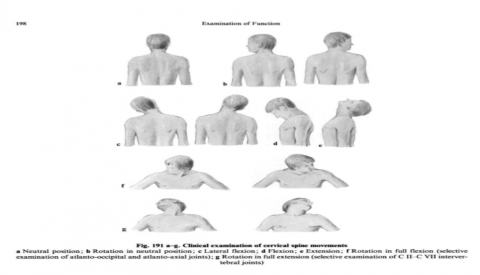 Cervicocephalic kinesthesia tests were also used to measure cervical ROM, since moderate- substantial test-retest reliability has been reported for measurements of cervical mobility. [4]

There are five tests to determine the cervicocephalic kinaesthesia. It is clear that patients with cervicocephalic syndrome have more difficulties to relocate the head to a neutral head posture and to repeat head movements (figure eight movement). The test may be divided into two categories:

These tests are reliable and have a good IC. [5]

The movement of axial rotation was chosen as the predominant test movement as humans use rotation most commonly in exploring the external environment. [6] [7]

Test 1: Relocation to the NHP (natural head posture). [8] The starting position was sitting with the head in NHP. Subjects were asked to perform full active cervical rotation to the left and right in turn and then to return and indicate when they considered they had relocated the starting position as accurately as possible.This point was recorded by activation of the electronic marker switch. Between each test movement, the subject’s head was manually adjusted back to the original starting position by the principal researcher who was guided by the real-time computer display. The examiner’s accuracy in relocating subjects’ heads was within ±0.2˚, as indicated by the marker,which changed colour from red to green when the accuracy was within the set limits.
When healthy persons and patients are compared, the patient group indicates significantly worse scores on the test[2]. The validity and test-retest reliability demonstrate an excellent result for measuring the cervical proprioception[4].

Test 2: Relocation to the 30˚ rotation position and to NHP. [9] In this test, the examiner pre-positioned the subject’s head in 30˚ left rotation and subsequently in right rotation. The computer visual display unit guided the researcher. A marker was placed to indicate the 30˚ position. Subjects were permitted to concentrate on this position of reference for a few seconds. They then turned their head to NHP and then returned to the 30˚ rotation position. Recordings were taken on each occasion subjects returned to the NHP and to the 30˚ position.

Test 3: Preset trunk rotation Subjects sat on a chair positioned on a specially constructed platform. A familiarization session was conducted before the formal test. Subjects first concentrated on their NHP. Whilst the researcher held the subject’s head steady, the platform (and therefore the subject’s trunk) was rotated to a pre-marked 30˚position of left rotation. Subjects were required to relocate their NHP with respect to the body and then return to the starting position (30˚ relative neck rotation). Following three trials in left trunk rotation, the test was repeated with the trunk rotated to the right.

Test 4: Figure-of-eight relocation test. Subjects were taught to perform a discreet figure-of-eight movement by moving the head. As a guide, a 10-cm diameter diagram of a figure-of-eight lying on its side was placed on a stand one metre in front of the subject. Subjects were instructed to trace the figure-of-eight with their nose toconfine movement predominantly to the upper cervical spine. Each subject was permitted three practice trials of the movement with their eyes open. The examiner corrected the performance if the movement was too little or too large, that is, involving the lower cervical spine. In the formal test,subjects performed the movement three times and, after each trial, were required to relocate to the start position as accurately as possible.

Because this condition occurs on a biomechanical level, the role of medication is purely symptomatic. No evidence is found for influence of the drugs on the volume or consistency of the cervical discs. Despite this fact medication has been proven to be effective because it relieves the patient of his deep and severe pain. Also sedatives and tranquillizers can be used. Those can lessen the central sensitization of the biomechanical stress. They can also help relieving the night pain which prevents the patient from having not only physical but also emotional stress. The therapy benefits from these results. Important is that medication is only used as an asset to the physical therapy.

It is important that the patient is well-informed and has a say in the therapy because misuse of these drugs is very dangerous.

The use of local anaesthetics or steroids can be indicated when the above-mentioned medication and heat do not relieve pain and/or muscle spasm.

In exceptional cases when conservative therapy does not work, surgery can be applied to help patients with chronic and recurrent cervicocephalic syndrome and unbearable pain.

Percutaneous drill resection is an effective technique with a reported 85–95% success rate. Using a radiofrequency (FR) generator, an alternative heats the tissue and destroys it. The target temperature is between 60-100 degrees.

CT-guided radiofrequency thermocoagulation is an effective, precise, secure, minimally-invasive treatment for non-radicular cervical pain caused by zygapophysial joint arthropathy, when CT-guided, lateral drug instillation does not cause a lasting improvement. [2]

Our to use radiofrequency to limit recurrences and complications that we had observed with PDR, such as skin necrosis.

We are uncertain whether eye-neck co-ordination exercises improve pain or function. Very low quality evidence (one trial, 60 participants) shows a moderate reduction in pain and improved function in chronic neck pain in the short term for eye-neck coordination exercises.[17] A clinician may need to treat four people to achieve this type of pain relief and three to achieve this functional beneﬁt in one person.

Cervicocephalic syndrome is associated with deep or superficial pain in the head, dizziness and often auditory or visual disturbances (e.g. nystagmus, tinnitus) caused by spondylogenic irritation and actual compression resulting in pain and restriction of motion of the upper cervical spine. The head relocation test is one of the best tests to examine if a person has cervicocephalic syndrome. In terms of physiotherapy, there is low evidence for pain relief with manipulation, mobilisation, exercise therapy (stretching, strengthening, general fitness), electrotherapy, education and neuromuscular exercises. More research is needed in this area to focus specifically on cervicocephalic syndromes and the most effective therapy treatments for this condition.