Au–Kline syndrome (AKS), also called Okamoto syndrome is a multiple congenital malformation syndrome associated with intellectual disability. It is primarily caused by loss-of-function variants in the gene HNRNPK, which encodes the heterogeneous nuclear ribonucleoprotein K (hnRNP K). It can be categorized as a very rare autosomal dominant genetic condition.

Au–Kline syndrome was first described in 2015 by Ping-Yee Billie Au, Antonie D. Kline et al. after mutations in HNRNPK were found in two individuals with similar symptoms at their respective practices in Calgary, Alberta, Canada, and Baltimore, Maryland, United States. Both submitted the gene as a candidate to the online service GeneMatcher, which matched them together and allowed them to confirm the syndrome.

Okamoto, in 2019 proposed that Au–Kline syndrome and Okamoto syndrome were synonymous because of a mutation in the HNRNPK gene, and the symptoms were virtually identical[1][2].

There is a protein called heterogeneous nuclear ribonucleoprotein K (hnRNP K) which is a part of the HNRNPK gene, that binds to the DNA or its RNA and other proteins. By bringing certain proteins together with DNA or RNA, this protein helps control the activity of genes and the production of proteins. By regulating certain genes and proteins, the hnRNP K protein plays a role in the normal development and function of several body systems, including the brain[2].

AKS is caused by mutations in the HNRNPK gene located on chromosome 9 at position q21.32, which produces little or no hnRNP K protein. This altered gene activity and protein production disrupt the normal development or functioning of several body systems. This may also cause affected brain development leading to intellectual disability, delayed development, and other neurological problems in people with the condition. 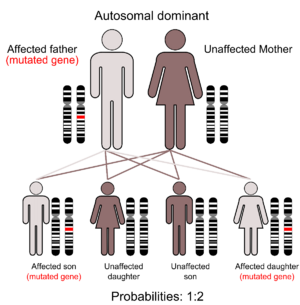 It is genetically inherited in an autosomal dominant pattern. Most cases of this condition result from new (de novo) mutations in the gene that occurs during the formation of reproductive cells (eggs or sperm) in an affected individual’s parent or in early embryonic development. These cases occur in people with no history of the disorder in their family.

This condition has been characterized by:

The condition can be diagnosed by physical symptoms and confirmed by genetic testing. Genetic testing can be done by:

Sanger sequencing can confirm the nature of the mutation [4].

Genetic counselling is an important aspect of management for this condition. Prenatal testing for pregnancies at increased risk is possible if the HNRNPK pathogenic variant in the family is known.

The prognosis of the condition is yet vague due to a handful of diagnosed individuals[4].