Anatomy of the Canine Spine

The Roof of the cranium is made up of frontal and parietal bones.

The Floor is made up of sphenoid bone.

The cranium consists of 5 orbital regions:

The orbit is complete in horse and ruminants while it is incomplete in carnivores but completed by the orbital ligament.

The lacrimal fossa collects tears and sends them through lacrimal canal into the nasal cavity. 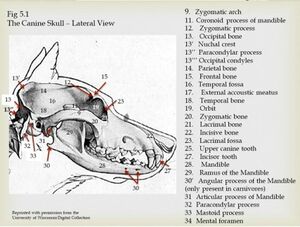 Joints and Ligaments of the Skull[edit | edit source] 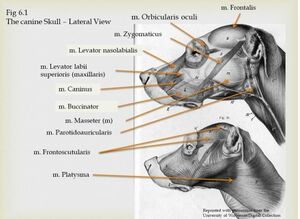 Joints of the hyoid apparatus:[1] 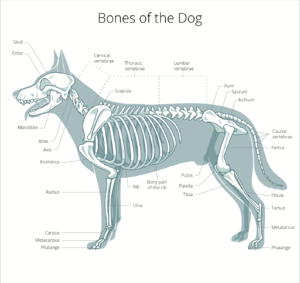 The anatomy of the canine skull and spine is quite similar to the human spine. Like in people, the canine spine supports weight and encloses the spinal cord. The spine is located along the dorsal / top side of the canine's body and runs from the base of the head to the end of the tail.[3]

The canine spine is divided into five regions: cervical, thoracic, lumbar, sacral, and caudal. There are 7 cervical vertebrae, 13 thoracic vertebrae, 7 lumbar vertebrae and 3 sacral vertebrae. The number of caudal vertebrae varies according to the species.[4]

The atlas and axis are cervical vertebrae 1 and 2. 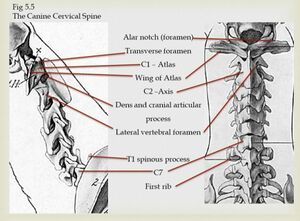 The atlanto-occipital joint is a condylar modified synovial hinge joint. The capsule of the joint is strengthened by three thickenings: dorsal, ventral, and lateral.[1] The transverse process of the atlas is the wing that allows the articulation of the occipital condyles and the spine.The atlas and axis are fused in embryonic life.[4] The transverse atlantal ligament holds the dens of the axis against the ventral arch of the atlas.[1]

The axis is the second and longest cervical vertebra. The atlantoaxial joint is a pivot joint and has a loose joint capsule. The dens of the axis is connected to the occipital bone through the apical ligament.[1] 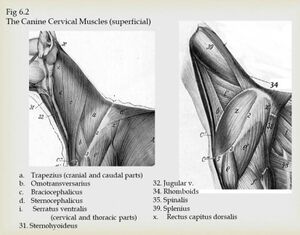 The costovertebral joint has two articulations between the rib and the vertebral column. The head of the rib articulates with the cranial and costal facets of the adjacent vertebrae and is a ball and socket synovial joint. Similarly, the tubercle of the rib articulates with the transverse process of the vertebra and is a plane synovial joint. The ligaments of the costovertebral joint are the radiate ligament of the head, inter capital ligament (connects the head of the pair of opposite rib), costotransverse ligaments and ligament of the neck.[1] 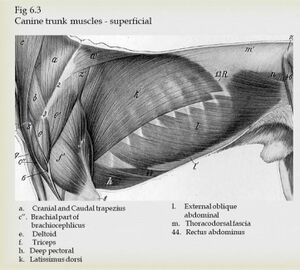 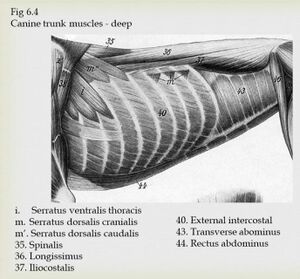 The number of caudal vertebrae differs from species to species. [4]