Protecting the Vulnerable in Disasters and Conflicts

Conflict and disasters often place people at an increased risk of discrimination and/or abuse, especially vulnerable groups such as children, women, older people and those with existing disabilities or chronic health conditions. In some contexts, this may also include particular ethnic or religious minorities, who face disproportionate risk during disasters and conflicts.[1] [2] While some contributing factors to this vulnerability may be intrinsic, most commonly they are due to environmental or societal factors that pre-date the disaster and conflict. Medical and rehabilitation professionals need to be aware of and act upon any factors that can make certain groups of people more vulnerable. They need to recognise that healthcare priorities cannot be adequately assessed without taking into account the specific vulnerabilities of these groups in disasters and conflicts, while acknowledging that these groups are not homogenous, and the risks they face vary from individual to individual, depending on the interaction of both personal and environmental factors.[2] Rehabilitation professionals are likely to come into contact with these groups as part of their role. They have the knowledge to understand the challenges these groups face and have a key role to play in protecting vulnerable people. As such, they should engage with all humanitarian protection mechanisms that are in place in raising any concerns they have encountered.[3]

As the frequency and intensity of disaster events increase around the globe, children are among those most at risk for the negative effects of a disaster. They represent a significant portion of those who endure the devastating long-lasting consequences of disasters.[2] Children are a highly vulnerable group, particularly infants and young children, who are partially or totally dependent on adults. Older children and adolescents are psychologically and physically vulnerable and may develop post-traumatic stress disorder or related symptoms. They experience death, injury, illness, and abuse and often must cope with disruptions or delays in their educational progress in the aftermath of a disaster. Systems that protect children and young people, including family and community structures, are often impacted during disasters and conflicts. Children may be separated from their families and this situation places them at increased risk of injury, abuse and exploitation, including trafficking or being recruited by armed groups.[4]

As rehabilitation professionals, we need to recognise the different forms of physical and emotional vulnerability and consider the different forms of physical, social, mental, and emotional support that infants, children and adolescents may require when compared to adults.[5] Moreover, in post-disaster and conflict settings, the voices of children are often not heard[6] and, as a result, children’s rights and needs are frequently under-addressed. This creates adverse long-term consequences for them and their communities.[7] The negative effects of disaster and conflict include a decline in children’s physical health and emotional and intellectual well-being in both the short- and long-term. Table 1 outlines the types of vulnerabilities that children and young people experience in a disaster and conflict setting including factors that influence them.

The United Nations Convention on the Rights of the Child (UNCRC), which is ratified by all countries apart from the USA, provides a comprehensive code of rights that offers the highest standards of protection and assistance for children. The UNCRC is a legally-binding international agreement setting out the civil, political, economic, social and cultural rights of every child, regardless of their race, religion or abilities and is applicable to all children within the jurisdiction of each state, regardless of whether they are a national or not. Organisations working in humanitarian response should have child safeguarding policies in place, and it is vital that rehabilitation professionals become familiar with and adhere to these child protection guidelines.

Healthcare in Danger - The Responsibilities of Health-Care Personnel Working in Armed Conflicts and Other Emergencies highlights the following questions, which rehabilitation professionals can use to guide their thinking around supporting children and young people following disasters and conflicts.[8]

Cultural and social practices regarding gender provide some of the most fundamental sources of inequality and exclusion around the world for women. They frequently manifest themselves through economic and political consequences, including gender inequalities in areas such as school and university enrolment, labour force participation, control over assets combined with lower social visibility, and less freedom and mobility. Given this status of women pre-disaster and conflict, it is not surprising that women are generally more likely than men to suffer injuries or to be killed during disasters and that violence against women and girls may be exacerbated during emergencies. Women also face an increased burden of care tasks, such as the provision of food and water, and caring for the sick and injured following disasters and conflicts, which further impacts their participation.

Healthcare in Danger - The Responsibilities of Health-care Personnel Working in Armed Conflicts and Other Emergencies highlights the following questions, which rehabilitation professionals can use to guide their thinking around supporting women and girls following disasters and conflicts.[8]

The success of industrialisation and advances in modern medicine and technology has resulted in an increase in average life expectancy and with that an increase in the percentage of people living beyond 60 years. The United Nations defines the older person as anyone 60 years and above. According to the World Health Organization (WHO), there were 600 million persons aged 60+ years in 2000, with that number expected to rise to 1.2 billion by 2025 and 2 billion by 2050, with a significant and growing number of those affected by humanitarian crises.[9] Pre-existing conditions and positions exacerbated by a crisis and specific issues and risks created by the emergency itself are the main challenges and protective factors that impact on the older person in humanitarian crises. These can be found at the individual, community and structural levels. Older age often compounds other forms of vulnerabilities or inequality, such as gender, race, education level, income, health status, or access to justice, that accumulate during a lifetime. When older persons do not enjoy their rights fully in regular times, their vulnerability to emergencies is likely to increase: [10] 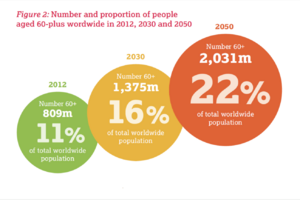 Currently, there is no United Nations Convention on the Rights of Older People or universally applicable standards, which could serve as a reference for developing legislation to protect such rights. This situation is unchanged despite frequent calls for enhanced actions to promote the full enjoyment of all human rights by older persons, and as such, older persons often remain invisible within current international legal frameworks. The 1991 United Nations Principles for Older Persons[13] provides an authoritative framework for the rights of older people including independence, participation, care, self-fulfillment and dignity, that can be applied during emergencies and humanitarian settings. The Madrid Plan of Action on Ageing,[14] is a practical tool endorsed by the UN General Assembly in 2002 to assist governments in addressing issues associated with population ageing, including social protection, health, nutrition, urbanisation, infrastructure, housing, and training of carers, which also prioritises humanitarian disasters as one of eight key areas for action, with a focus on equal access and inclusion.[2] 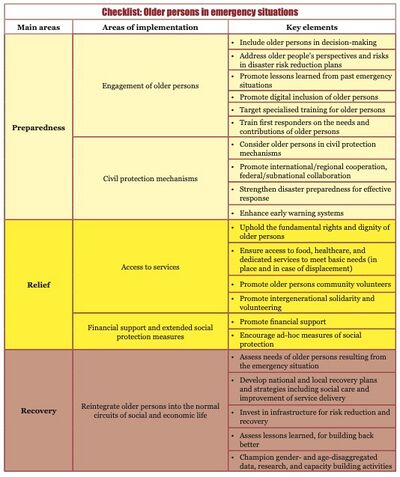 The humanitarian needs and requirements of older persons should be included across all stages of emergency and humanitarian responses including engagement with older persons to ensure their involvement in decision making. This helps reduce their vulnerability to further hazards by enabling more equitable access to community-based risk-reduction activities, to early warning systems and evacuation mechanisms. Rehabilitation professionals can play a role in this and can support this process by assessing the protection issues faced by older persons, including older persons in all decision-making, and by advocating for the older person during disasters and conflicts. Figure 1 outlines key elements to include older persons in each phase of the disaster management process.

Healthcare in Danger - The Responsibilities of Health-care Personnel Working in Armed Conflicts and Other Emergencies highlights the following questions, which you can use to guide your thinking around supporting older persons following disasters and conflicts.[8]

Persons with a Disability[edit | edit source]

Over a billion people in the world today are estimated to live with some form of disability, which corresponds to about 15% of the world's population, or one in seven people. Between 110 million (2.2%) and 190 million (3.8%) people 15 years and older have significant difficulties in functioning, while some 93 million children or one in 20 of those under 15 years of age live with moderate or severe disability. Since the adoption of the United Nations Convention on the Rights of Persons with Disabilities (UNCRPD), disability has been firmly established as a human rights and development issue. There is an increasing body of evidence highlighting that people with a disability experience worse socioeconomic outcomes and poverty than persons without disabilities. Article 11, on “Situations of Risk and Humanitarian Emergencies” pays particular attention to the obligation of states to undertake “all necessary measures to ensure the protection and safety of persons with disabilities in situations of risk, including situations of armed conflict, humanitarian emergencies and the occurrence of natural disasters”,[15] while Article 32 recognises the importance of international cooperation to address the limited capacities of some states to respond to situations of risk and humanitarian crises, both highlighting that emergency and humanitarian operations must be inclusive of people with disabilities.[15]

People with disabilities may be disproportionately affected by disasters and conflicts, with evidence suggesting that mortality rates for people with disabilities (2.06%)[16] are double, or even up to four times that seen for the general population (1.03%)[16] in disaster settings.[2][17] In emergency responses, people with disabilities may also be more likely to be left behind, lose essential assistive devices such as spectacles, hearing and mobility aids and/or medications or fail to benefit from humanitarian services due to a range of environmental, physical and social barriers .[18][17] They may also have greater difficulty accessing basic needs, including food, water, shelter, latrines and health-care services and can also face higher risks associated with safety, protection and dignity and may be particularly vulnerable to violence, exploitation and sexual abuse.[17] Traditional caring mechanisms within the community are also interrupted and the capacity of caregivers and care settings to provide for and support people with disabilities are often reduced, further increasing vulnerabilities and risks for people with a disability.[8]

The following webinar recording, organised by ICVA, PHAP, and the Inter-Agency Standing Committee (IASC), introduces the guidelines for the inclusion of persons with disabilities in humanitarian action and discusses how the guidelines can be implemented in practice.

The humanitarian needs and requirements of persons with a disability, paying attention to the diversity of disabilities, should be included across all stages of emergency and humanitarian responses. This includes engagement with disabled person organisations, where they exist, to ensure the involvement of people with disabilities in decision-making. This helps reduce their vulnerability to further hazards by enabling more equitable access to community-based risk-reduction activities, early warning systems and evacuation mechanisms. Rehabilitation professionals can support this process by including persons with a disability in all decision-making, and by ensuring that planning does not just focus on those injured during the disaster, but also incorporates all those with a disability.

Healthcare in Danger - The Responsibilities of Health-care Personnel Working in Armed Conflicts and Other Emergencies highlights the following questions, which you can use to guide your thinking around supporting persons with a disability following disasters and conflicts.[8]

Persons with a Disability[edit | edit source]