Eschar: Eschar refers to the nonviable layers of skin or tissue indicating deep partial or full thickness injury. It is black, thick and leathery in appearance. This word is not synonymous with the word "scab".

Scab: Dry, crusty residue accumulated on top of a wound, resulting from coagulation of blood, purulent drainage, serum or a combination of all.

Pseudo-Eschar: A thick gelatinous yellow or tan film that forms with silver sulfadiazine cream combining with wound exudate. It can often be mistaken for eschar, but it can be removed with mechanical debridement.

Petechiae: Pinpoint, round spots that appear on the skin as a result of bleeding. The spots can appear red, brown or purple in colour.

For an overview on wound healing, and the anatomy and physiology of the skin, please read this article.

A circumferential burn wound is typically found around an extremity or the torso and puts the patient at a significant risk for compartment syndrome. This pattern of burn injury involves deep partial thickness, full thickness, and or subcutaneous burns. 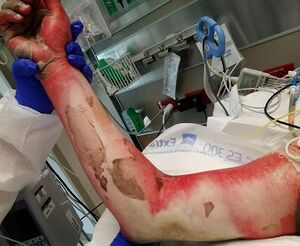 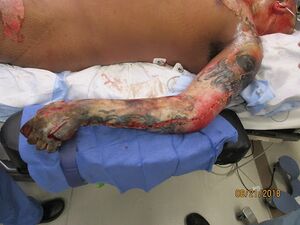 The blanch test is similar to the capillary refill test. It is a bedside exam to assess blood flow to the capillaries of the skin. This can be performed over intact skin or in a wound bed itself.

To perform the test:

The following optional video includes a demonstration of the blanch test.

Jacksons’ Burn Wound Model[1] is a model used to understand the pathophysiology of a burn would. This model divides the wound into three zones. 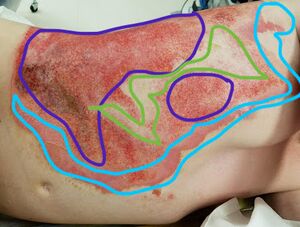 Zone of coagulation outlined in purple; zone of stasis in green; zone of hyperaemia in blue 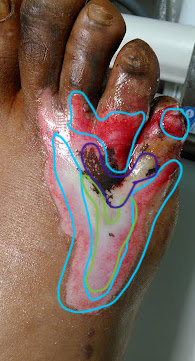 Zone of coagulation outlined in purple; zone of stasis in green; zone of hyperaemia in blue

Burn Wound Conversion:[2] True burn wound conversion is a deterioration of the wound due to events unrelated to the initial burn injury. This refers to the worsening of tissue damage in a burn wound which previously was expected to spontaneously heal, but instead it increases in depth to a deeper wound which may require surgical intervention.

Total body surface area is an important figure when applying the Parkland Burn Formula. This formula is the most widely used formula to estimate the fluid resuscitation required by a patient with a burn wound upon on hospital admission. It is usually determined within the first 24 hours of admission.

When applying this formula, the first step is to calculate the percentage of body surface area (BSA) damaged. This is most commonly calculated using the "Wallace Rule of Nines".[3] When conducting a paediatric assessment, the Lund-Browder Method is commonly used, as children have a greater percentage surface area of their head and neck compared to an adult. The formula recommends 4 millilitres per kilogram of body weight in adults (3 millilitres per kilogram in children) per percentage burn of total body surface area (%TBSA) of crystalloid solution over the first 24 hours of care.[4]

The latest research indicates that while this method is still in use, the fluid levels should be constantly monitored, while assessing the urine output,[5] to prevent over-resuscitation or under-resuscitation.[6] 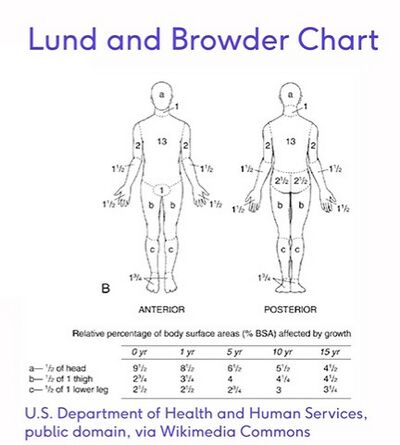