The valgus stress test, also known as the medial stress test,  is used to assess the integrity of the medial collateral ligament (MCL) of the knee. MCL injuries are common in the athletic population and can occur as either isolated injuries, or combined with other structural injuries [1]. 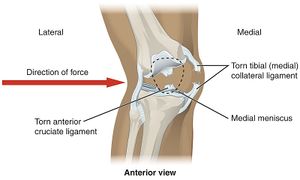 Overall, the MCL plays a crucial role in the stability of the knee and acts as the primary valgus restraint in a flexed knee. If knee hypermobility is present due to a sprained MCL, the ACL is placed under higher stress loads with valgus forces (particularly at 45 degrees of knee flexion). Therefore, special precautions should be taken with individuals who present with a lax MCL to decrease any risk of further injury, particularly of the ACL [4].