Original Editor - Merinda Rodseth based on the course by Damien Howell

Over the past decade, there has been a growing demand for precise and accurate methods to assess human movement.[1] “Motion and posture analyses are effective tools used in diagnosis, therapy and prevention of musculoskeletal disorders”.[1]

The focus of this page will be to identify and define key reference points useful to describe motion and deviant motion when performing 2D slow-motion video analysis.

The denotation or definition of a word explains what the word explicitly means, while its connotation is what it implies or is associated with. The connotation is the emotional and cultural baggage that goes with the word and often carries a negative inference  – creating a nocebo effect.[2]

Deviation - “the action of departing from an established course or an accepted standard or deviation from a norm”. Dysfunction - “not operating properly or normally”, "abnormality"

Dysfunction thereby carries a negative connotation, whereas the connotation of deviation is more neutral. Even though these words might be synonymous, describing something as “deviant” depicts a more positive approach and its use recommended.[2]

Movement deviation is also synonymous with movement compensation. Movement deviations/compensations can be good or bad and can have positive or negative effects. Humans and animals alike will automatically or instinctively choose the best compensation to move in order to avoid pain and expend the least amount of energy based on the law of the path of least resistance. Compensatory movements occur at an unconscious level and may continue long after the original injury has healed and the pain alleviated because the movement has become habitual.[2]

The movement deviation/compensation may also be the best strategy for the patient at that specific time and they might want to continue with it. Whether this compensation should be altered needs to be established by the physiotherapist after assessing the patient and testing it. This brings us to the use of the words “correct” compared to “alter” when referring to movement deviations.[2]

Only after assessing the patient and establishing a working hypothesis can the decision be made why the compensation exists and if it is in fact ideal for the patient or if there are others available that should rather be considered. The working hypothesis will therefore determine if an intervention to alter the deviation or compensation is justified. It is, therefore, preferable to use the term “alter” rather than “correct” movement.[2]

A reference point is needed to determine if something is in motion. Motion is described relative to the

but it is key to have reference points.[2]

There are some established key reference points that are useful when analysing motion to determine whether the movement is deviant or relatively normal.[2]

Movement Relative to the Line of the Horizon[edit | edit source]

Using the line of the horizon as a reference point enables the clinician to observe costly upward accelerations/deflections of the Centre of Mass (CoM).[3] The reference point is the CoM which has been shown to lie a few centimetres in front of the lumbosacral joint in quietly standing humans.[3] Tracking the centre of mass during movement as with walking or running, is however much more complicated.[3] Using the iliac crest as a surrogate for the CoM, vertical displacement is easily determined by comparing the highest point of the iliac crest during float to its lowest point during stance.[4] For runners, this vertical displacement of the CoM should be about 6-8 centimetres compared to around 9 cm in walkers.[2] Vertical displacement has important implications for injury mechanics and energy expenditure.[4][5]

Movement relative to the line of gravity is considered relative to the CoM. Viewing a patient from the side (sagittal view), the CoM is inferred to be at the greater trochanter.[2] With the greater trochanter as a body landmark, a vertical line (line of gravity) and a line bisecting the trunk is drawn to measure the deviation of the trunk anteriorly or posteriorly (deviant from vertical). 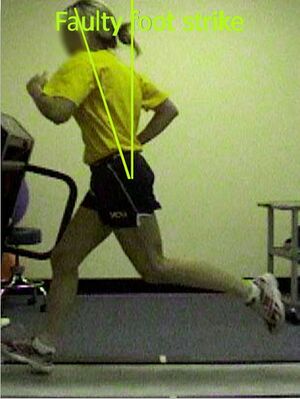 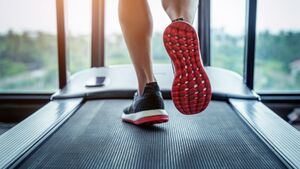 Foot progression angle. Toe-out deviation of both feet in the stance and swing phase

This longitudinal line bisecting the foot can be used to indicate whether the patient is running with toes out or toes in.[2] During toe-out, the lateral aspect of the shoe is visible from the posterior view whereas the big toe (first ray) and medial aspect of the shoe can be seen with toe-in progressions.[4]

CoM is a parameter widely used in clinical and practical applications and provides useful information about the energy requirements of gait and as a descriptor of pathological gait.[7]  Stability of the body is dependant on the relationship between the CoM and the base of support (BoS).[5] With the CoM lying a few centimetres in front of the lumbosacral joint in stance, a line through the sacrum is inferred to depict the CoM.[2][7] The CoM should remain within in base of support during the stance phase, with the line depicting the CoM passing through the sacrum.[2][8] The line of gravity therefore theoretically divides the body in half. During each step, the CoM oscillates laterally towards the weight-bearing leg, then swings back towards the opposite leg during the next step.[3] Lateral displacement of the CoM is of particular clinical importance as it has been implicated in many pathological conditions and orthopaedic impairments.[3] 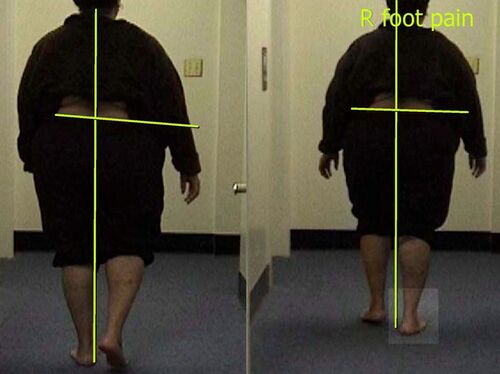 Using the point of maximum determination for joint range of motion (joint axis reference point) can also give an indication of symmetry by comparing it to the adjacent limb.[2] 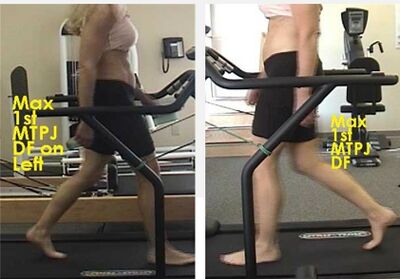 Movement can also be described as it relates to the adjacent body segment for example:[2]

Movement Relative to an External Object or Target[edit | edit source]

Hitting a target can also suffice as a point of reference for describing motion.[2] For golf, the point of determination can be when the golf club hits the ball and it is at this point that the physiotherapist will analyse the golfers thoracic spine and hip position and movement compared to established norms.

For rock climbers, “hitting the target” infers the moment the climber grabs the rock or ledge and it is at this moment in time that the motion is analysed. In this instance, the external point (rock/ledge) is the point of reference.[2] 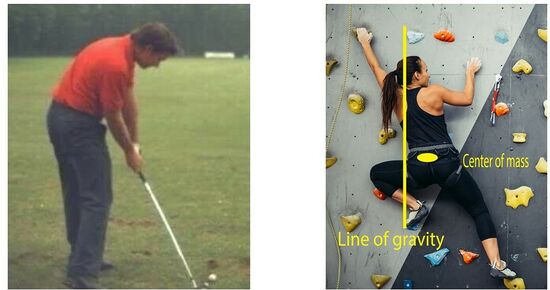 Image on the left - point of determination is when the golf club hits the ball – notice spinal flexion and decreased hip flexion. The image on the right was captured when the left hand reached the handhold

Besides the reference points already discussed, motion can also be described relative to normative values and relative to the uninvolved side.[2]

Gait is one of the most commonly assessed human motions and refers to “the displacement of the centre of gravity during locomotion”.[9] This is achieved in humans through the synchronised and coordinated movement of the trunk and the lower, resulting in a change in the body centre-of-mass position.[9] Gait is characterised by repetitive cycles for each foot where each cycle can be divided into 2 phases: Stance phase with the foot in contact with the ground, and Swing phase with the foot off the ground, [9][10] which brings us to the use of frames of reference for describing motion.

1. The anatomical planes of the body

Periods of the phases of gait

Phases of a rowing stroke motion

Motion is described relative to the:

Phases of a golf swing

Describe the frame of reference relative to the: 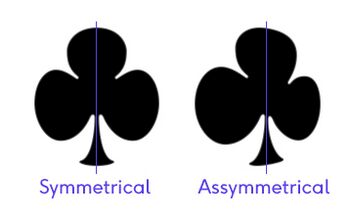 Alternatively, to determining asymmetry, the analysis can compare the observed movement relative to normative data - the theoretical ideal movement.