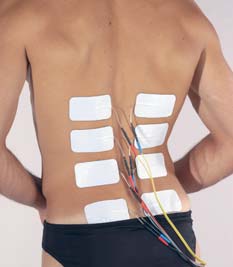 Traditional management of postoperative pain with the use of opiates has resulted in unwanted side effects such as respiratory depression, nausea and vomiting, hypotension and bradycardia, pruritus and inhibition of bowel movements.  Investigations on effective management of postoperative pain with minimal side effects has led to the use of Transcutaneous Electrical Nerve Stimulation (TENS) due to its success in pain control.

The effects of extensive use of Transcutaneous Electrical Nerve Stimulation (TENS) to control postoperative pain has been quite controversial and this can be attributable to the varying intensity of postoperative pain and the type of surgical operation performed.[1]

Transcutaneous Electrical Nerve Stimulation (TENS) is a non-invasive, non -pharmacologic method of pain relief through electrical stimulation. The use of TENS postoperatively has showed a reduction in the use of analgesics in patients and a reduction in occurrence of postoperative complications such as respiratory depression. Although, reports have showed that some surgical procedures are too painful for TENS to have a significant effect on pain such as in severe postoperative pain after posterior thoracotomy.

Application of TENS as an auxiliary therapeutic method in management of acute and chronic pain of various abdominal and thoracic surgeries occurred since 1970. Its use was based on the Gate Control Theory of Pain and daily repeated application produces analgesic tolerance at spinal opioid receptors and increases the toleration threshold of pain. In addition, TENS results in the release of endorphins, serotonin, analgesic hormones and reduction of cytokine levels and increases blood flow to the muscle tissue. Recent studies have showed that use of TENS in patients resulted in significant pain reduction during respiratory manoeuvres and higher maximal expiratory pressure[2], improvement in pulmonary function, low blood cytokine levels and narcotic consumption[3] and improvement in cognitive functions in patients undergoing spinal surgery[4].

Implications for use in physiotherapy[edit | edit source]

A lot of investigations have been carried out on the clinical efficacy of TENS for acute and chronic pain management including knee osteoarthritis, rheumatoid arthritis, low back pain, neck pain, post-amputation pain, post-stroke pain, spinal cord injury, diabetic peripheral neuropathy, chronic and recurrent headache, neuropathic pain, and cancer pain. However, there was an extensive variation in the frequency of use and this could be attributable to a lack of knowledge of the modality, and neurophysiological rationale underpinning it, or perhaps a lack of confidence with results and often reviewers are unable to make definitive judgement about clinical efficacy because of inadequate Randomised Controlled Trial (RCT) design, poor reporting and concerns about trial fidelity and TENS technique.[9] Consequently, the use of TENS as an adjunct to analgesic medication in multi-modal management of acute post-surgical pain should be considered.