Staging a tumor is the process of finding out the cancer in a patient. A cancer’s stage can also be used to help predict the course of the cancer, as well as how likely it is that treatment will be successful. It is used in almost every oncological patient to describe the tumor, regardless of the localisation of the primary cancer.

In most cases the biopsy exam do not modified the TNM[1] stage system: infact the biopsy finds out if a disease is present and, if so, it precisely and accurately classifies the disease according to the cells differentiation. TNM system could stage both benign or malign tumors. Because of that in case of benign tumors, the N and M letters would be follow by 0.

In the TNM system, the overall stage is determined after the cancer is assigned a letter or number to describe the tumor (T), node (N), and distant metastasis (M) categories[2].

T describes the original (primary) tumor. The T determine the size of the tumor according to the physical assessment or imaging and endoscopy exams. 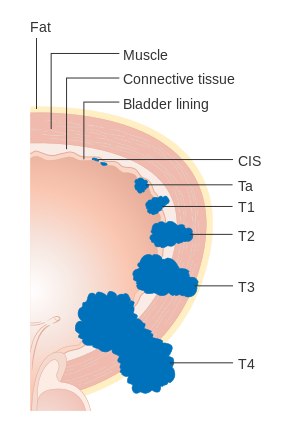 Tumor size staging according to TNM

The Mx designation was removed from the 7th edition of the AJCC/UICC system, but referred to cancers that could not be evaluated for distant metastasis.

The cancer stage is also a way for doctors to describe the extent of the cancer and the aggravation during time. When a cancer is staged again after the initial staging, it is sometimes referred to as restaging. Infact the first clinical stage (cTNM) is often reassessed by the surgeon during surgery. Because of that the new reassessement is called the pathological stage (pTNM). The uTNM stage is determined by ultrasonography or endosonography.

In case of secondary tumors or relapsed cancers the staging is added to the previous primary classification. It is defined as rTNM when its new stadiation is only clinical, or rpTNM when the new stadiation had a pathological examination. Ther mTNM tumor staging is a multifocal cancer(more than 1 tumors).

The TNM staging system could also be used for an autopsy re-examination of the cancer. In that cases is defined as aTNM.

For most cancers other factors could be included in the stadiation process. The better treatment option for the patient could be determined also by the grade of differentiation of the tumor's cells or by the spread of the tumor in vassels. Because of that other parameters can be used:

Other specific parameters in lymphoma or blood cancer: