Shoulder instability is the symptomatic abnormal motion of the glenohumeral joint (GHJ), which can present as pain or a sense of displacement either as a subluxation or a dislocation. The patient usually reports abnormal motions and sense of apprehension while doing Activities of daily living (ADLs). Shoulder being a mobile joint has a high predisposition for Instability.[1] 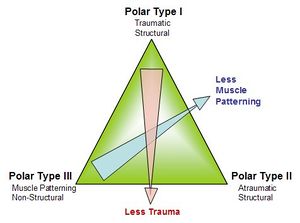 The classification suggests that for the symptoms to occur there has to be a disturbance of one or more of the following factors, in isolation or together:

These group patients usually present with a positive apprehension (anterior direction) associated with rotator cuff weakness. Subscapularis shows deficits on either the belly-press or modified lift-off tests [3]. Global posture, single leg balance and scapular control are often undisturbed in these patients[2]. As these patients move towards either the type II or III poles, patients begin to exhibit signs of poor scapular control, abnormal muscle activation, altered trunk stability and balance, indicating non-structural comorbidity. The imaging is only used in cases suspected of structural abnormality. Arthroscopy is useful to look for the subtleties of internal lesions of occult instability, such as bicipital and deep surface cuff lesions, soft tissue Broca defects, internal impingement and external impingement lesions.

Patients in this group present with positive anterior apprehension test with signs of increased capsular laxity, excessive external rotation and a sulcus sign. There may also be an associated glenohumeral internal rotation deficit (GIRD). The abnormal anterior translation of the GHJ within this group can be due to a combination of several factors: excessive anterior capsular laxity, scapular dyskinesis, tight posterior capsule, muscular imbalance (increased ratio of internal rotator/external rotator strength) and congenital labral pathology. The Presentation usually varies in individuals from different sports[2].

Patients lying in this spectrum of the pathology shows aberrant activation large muscles and simultaneous suppression of the rotator cuff. Dynamic EMG has characterised latissimus dorsi, pectoralis major and anterior deltoid among the large muscles, and only infraspinatus of the rotator cuff. If there is no clinically or electrophysiologically proven aberrant muscle activation then the condition is labelled type II. Polar III patients will have a history of ‘party tricking’ the shoulder. This will often occur in the midranges of movement or with the arm-dependent by the side indicating a muscular control problem. These patients need a thorough assessment of the muscle activation pattern as well as the resting position of the GHJ (Glenohumeral Joint)[2].