After a severe burn trauma, often acute burn surgery is needed in order to provide a foundation for the affected skin areas to heal. However, after treating the burned areas under acute surgery, wounds do not always heal well within in the following weeks or months. In cases where the first surgery was either not very effective or scar tissue has build up, reconstructive burn surgery may be indicated. This option is often used to "improve both the function and the cosmetic appearance of burn scars".[1] Scars will thus be less prominent and apparent which is a major influencing factor for the psychological affect burn wounds can have on a person.[2] Through the procedure the affected skin will allow for more flexibility and movement capacity, which may, depending on the location of the burned area, also improve joint flexibility.

Choosing the correct method of reconstruction, depend on the extent of the missing tissue and the structures affected. The reconstructive methods are applied in a hierarchy as per the reconstructive ladder (Figure 1). Starting from the simplest procedure such as Split Skin Grafts on the first step to compound tissue transfer by Micro vascular surgery at the other extreme. [3] 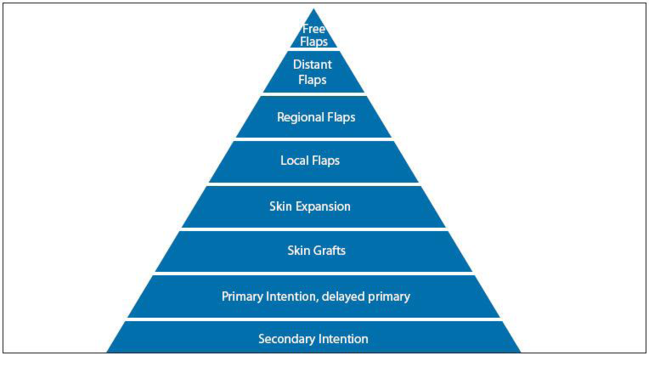 Figure 1: The reconstructive ladder, procedures ranging from simplest to most complex. 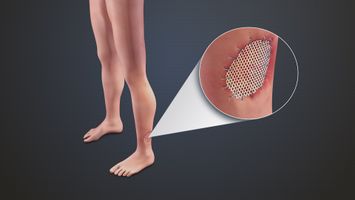 A skin graft is the transportation of skin from one area of the body to another. A graft is an area of skin that is separated from its own blood supply and requires a highly vascular recipient bed in order for it to be successful. Prior to grafting, the process of wound debridement must take place. Wound debridement involves removing necrotic tissue, foreign debris, and reducing the bacterial load on the wound surface. This is believed to encourage better healing. The following are the methods available for grafting onto a debrided wound to obtain closure:

A skin flap consists of skin and subcutaneous tissue that survives based on its own blood supply. Skin flaps are classified by the source and pattern of that blood supply.

If the skin of the scalp was damaged by a burn trauma, hair follicles can be destroyed which results in hair loss. In order to recreate hair growth, healthy, undamaged skin is stretched and transplanted.[2] Hair transplantation is another treatment possibility. For this procedure hair follicles are taken from healthy parts of the scalp to the damaged skin.

Breast and especially nipple-areola reconstruction surgery can be performed in various techniques and is subject to extensive research, since surgery does not always significantly improve the outcome.[4]

Physiotherapists must work as part of Multi Disciplinary Team (MDT) in order to ensure successful surgery while at the same time ensuring long term health and function. To gain the optimal result from any reconstructive surgery scar management needs to recommence and be followed through until scars are mature and optimal range of movement gained. Reconstructive surgery injures the skin again and the potential physiological scarring process recurs

Cover the principles and aspects of therapy described below: