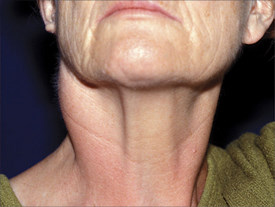 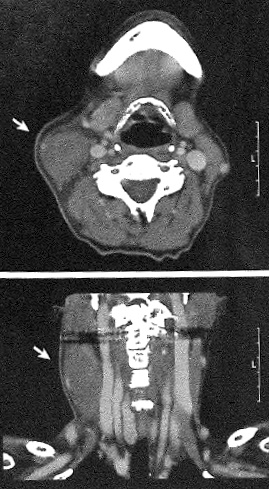 No associated co-morbidities have been reported.

Ibuprofen and other NSAIDs may be beneficial in decreasing pain and inflammation.

Proliferative Myositis is diagnosed based on biopsy[1].  The following list, taken directly from the Stanford University School of Medicine page on PM, are histologic and immunologic characteristics of PM which are used in its diagnosis: 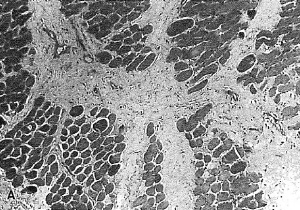 While etiology is unknown, PM may result from injury to the muscle, fascia, or vasculature (resulting in ischemia) of the associated area[4].

Mulier et. al reported a case in which one patient had a mild fever (37.5 degrees C or 100 degrees F)[5].  No other cases of systemic symptoms have been reported.

Proliferative Myositis is a self-limiting pathology, meaning that the growth of the tumor will eventually stop.  While spontaneous resolution of the tumor has been reported[1][8][5], surgical excision is the only treatment and recurrence following excision is rare[2].

No formal reports of the physical therapy treatment of PM have been published.  However, it has been theorized that PM is a precursor to heterotopic ossification or myositis ossificans[6].  Thus, aggressive range of motion and strengthening exercises should be avoided to prevent possible aggravation of the condition while the tumor is still enlarging.  Following surgical excision, ROM and strengthening exercises and modalities to regain normal muscular function and decrease pain may be beneficial.[5]

PM in the bicep of a 65 year-old female.  Access this study in Radiology[9].

PM in the sternocleidomastoid of a 64 year-old female. Access this study in the Archives of Otolaryngology[1].

PM in the paraspinal muscles of a 14 year-old male.  Access this study in Skeletal Radiology[5].

PM in the chest wall of a 48 year-old male.  Access this study in The Annals of Thoracic Surgery[10].