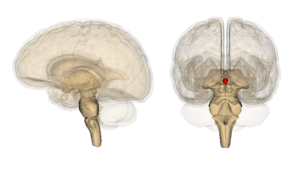 The pineal gland, a small, pine-cone shaped structure, is an endocrine gland located in the posterior aspect of the cranial fossa in the brain. The pineal glands main role is to control the circadian cycle of sleep and wakefulness by secreting melatonin. It is also has a role in reproductive function, being associated with the onset of puberty.[1]

Light and the pineal melatonin circuit

The human pineal gland is a tiny (weighs 0.1 g), highly vascularized, secretory neuroendocrine organ. It is found in the mid-line of the brain, connected to the roof of the third ventricle by a short stalk. The main role of the pineal gland is to produces melatonin, a derivative of serotonin, which affects the modulation of wake/sleep patterns and photoperiodic (seasonal) functions. In humans, the main cell types are pinealocytes (95%) along with scattered glial cells (astrocytic and phagocytic subtypes). Pinealocytes synthesis and secrete melatonin.[2] Melatonin production is upregulated by darkness and decreases production when exposed to light. Melatonin also protects against neurodegeneration.[3] 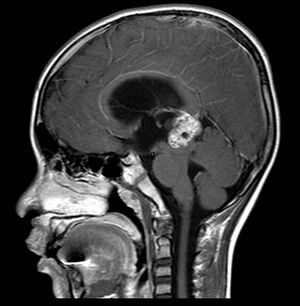 Due to the pineal gland's location, any pineal region mass leads to the compression of the aqueduct of Sylvius ( an important structure allowing the cerebrospinal fluid to circulate out. When blocked by an abnormal pineal gland, the passage of the duct is blocked, and CSF pressure increases, leading to hydrocephalus. Symptoms of this include nausea, vomiting, visual changes, headaches, seizures, and memory changes. This can be life threatening.[3]

For more on the importance of melatonin and sleep, see Sleep: Theory, Function and Physiology and complete the Sleep Programme.