Perceptions about Ageing and Ageism

Many people equate the onset of age to a period of infirmity. Despite inevitable bodily changes however, a person can enjoy a well-functioning mind and body, and should be able to live independently, with a good quality of life. The video below shows some lovely happy old people enjoying ageing.

Age discrimination cost the UK an estimated £26 billion in 2005 through litigation costs. It is recognised as such a serious issue that the Law on Age Discrimination was passed in 2006. The Employers Forum on Age estimates that age laws could expose UK employers to £73 billion in litigation costs. They positively reinforce that businesses could tackle the impending talent shortage, and the business benefit from an age-diverse workforce. Age UK continue to run anti-discrimination campaign. For individuals, discrimination causes disaffection, resentment and low self-esteem. It can affect anyone, and can result in both unfair advantage and disadvantage. 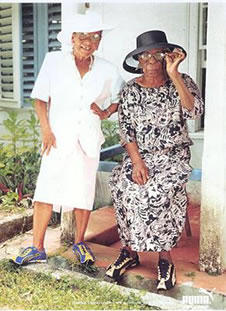 During the 1990's, gerontologists Butler, Lewis and Sutherland researched and listed factors that have negatively influenced attitudes toward old age in America. These include:

The media is well known to portray older subjects as stereotypes that devalue ageing in society, with television and popular magazines emphasising youth and beauty. Despite this, legendary beauties like Catherine Deneuve, Helen Mirren and Sophia Loren are still voted in Style List top 10 in their 6th and 7th decades. Some magazines or advertising companies use older models eg Christie Brinkley, Elle MacPherson

We must also not forget leaders such as Nelson Mandela and Winston Churchill - both over 70 years old when they were eminent leaders of their countries.

In healthcare in the United Kingdom, we have seen a positive change in attitude towards older people. The negative connotation of certain age-associated phrases used within the National Health Service has seen the specialism evolve from 'geriatrics' to 'Care of the Elderly', now simply to addressing the population as they are i.e. older adults.

From unpublished discussions with people receiving rehabilitation, older people have stated some benefits of age as follows:

Peer mentors
This is a form of mentoring that started in learning environments such as schools, occurring between an older more experienced student and a new student(s). Peer mentoring has now developed into areas that use older people, whether to encourage those of the same age, or to work in intergenerational settings and mentor a younger person. It is seen as a good way of practicing social skills for the mentor and help on adapting and settling in for the mentoree. Most peer mentors are picked for their sensibility, confidence, social skills and reliability. The area of education and of physical activity is where peer mentors are being drawn most from the older population.