Pallister-Killian mosaic syndrome is a developmental disorder that affects many parts of the body. It is a rare chromosomal disorder caused by the presence of at least four copies of the short arm of chromosome 12 instead of the normal two.In 1977, the syndrome was reported independently by Pallister, and again in 1981 by Teschler-Nicola and Killian. However, it wasn’t until 2003 when Pallister performed chromosomal analysis on skin fibroblast that the presence of tetrasomy 12p was found.[1]

As cells divide during early development, some cells lose the isochromosome 12p, while other cells retain the abnormal chromosome. This situation is called mosaicism. Almost all cases of Pallister-Killian mosaic syndrome are caused by mosaicism for an isochromosome 12p. If all of the body's cells contained the isochromosome, the resulting syndrome would probably not be compatible with life.[2] 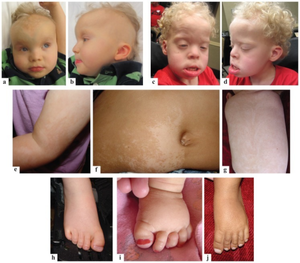 Gene Testing-the isochromosome i(12p) can be primarily detected in samples of skin fibroblasts, as well as in chorionic villus and amniotic fluid cell samples.[3]

Pallister-Killian mosaic syndrome can be diagnosed before birth (prenatally) by removing a small amount of fluid that is in the womb during pregnancy (amniocentesis) or by removing a small number of cells from outside the sac where the fetus develops (chorionic villous sampling). Cell cultures may yield a false negative however, and a normal chromosomal analysis does not completely rule out the condition.[4]

There is no specific therapy for individuals with Pallister-Killian mosaic syndrome. Affected children may benefit from early intervention programs and special education. Genetic counseling may be of benefit for affected individuals and their families. Other treatment is symptomatic and supportive.[5]

With as minimal as 250 cases reported to have the syndrome, physical therapy intervention has not quite been explored in this condition. According to a case report published in 2018[6], the following have shown results-