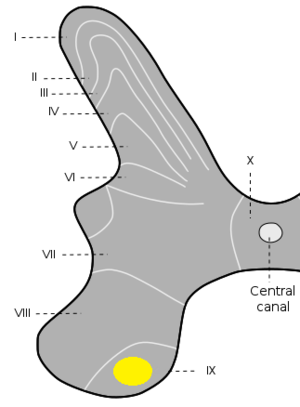 Onuf's nucleus is a small group of motor neurons located in the anterior horn of the S2 segment of the spinal cord. It is named after Bronislaw Onufrowicz, a neurologist, who first discovered the structure in 1899. It is the site of origin of the pudendal nerve.[1][2]

In addition to its motor functions, Onuf's nucleus also performs autonomic functions by association with parasympathetic neurons in the sacral segment of the spinal cord.[3]

Onuf's nucleus, interestingly, is the only motor neuron preserved in Amyotrophic Lateral Sclerosis.[4] Additionally, it is also spared in Spinal Muscular Atrophy, Duchenne Muscular Dystrophy, and Poliomyelitis. In stark contrast, it is one of the most affected structures in Multiple System Atrophy.[2][3]

Therefore, the presence or absence of incontinence and/or impotence allows clinicians to rule in or out the conditions mentioned above, from their differential diagnosis, subsequently saving time during a clinical examination.