The Moss Attention Rating Scale (MARS) is an observational rating scale of attention-related behaviors, useful in assessing people with moderate to severe TBI, particularly those undergoing acute inpatient rehabilitation. It was developed by Whyte and Hart at Moss Rehabilitation Research Institute[1].

Patients with brain injury at Rancho level IV or higher[2]. 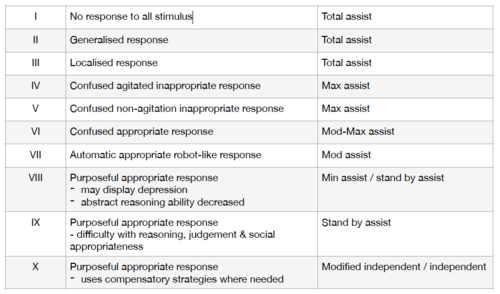 The scale is a 22 item measure to be administered manually by clinicians, Each item is a behavioral descriptor rated on a five-point Likert-type scale according to how well that behavior describes the patient, ranging from “definitely true” to “definitely false.”

The Scale is free of cost and requires no special training.

The questionnaire consists of 22 items which the clinician has to score on observation[1]:

1. Is restless or fidgety when unoccupied

3. Persists at a task or conversation for several minutes without stopping or “drifting off”

4. Stops performing a task when given something else to do or to think about

5. Misses materials needed for tasks even though they are within sight and reach

6. Performance is best early in the day or after a rest

7.Initiates communication with others

8. Fails to return to a task after an interruption unless prompted to do so

10. Persists with an activity or response after being told to stop

11. Has no difficulty stopping one task or step in order to begin the next one

13. Tends not to initiate tasks which are within his/her capabilities

14. Speed or accuracy deteriorates over several minutes on a task, but improves after a break

15.Performance of comparable activities is inconsistent from one day to the next

17. Perseverates on previous topics of conversation or previous actions

18. Detects errors in his/ her own performance

19. Initiates activity (whether appropriate or not) without cuing

20. Reacts to objects being directed toward him /her

21. Performs better on tasks when directions are given slowly

22. Begins to touch or manipulate nearby objects not related to task

Get additional information and the scale: here