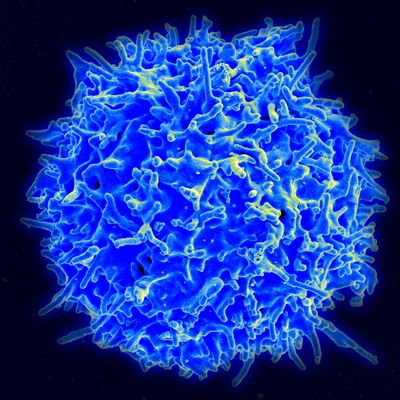 Lymphocytes are a type of white blood cell (or leukocyte). They help an organism to fight infections. They occur in the immune system of all vertebrates.

In human adults lymphocytes make up roughly 20 to 40 percent of the total number of white blood cells. They are found in the circulation and also are concentrated in central lymphoid organs and tissues, such as the spleen, tonsils, and lymph nodes, where the initial immune response is likely to occur.[1]

Image: Scanning electron micrograph of a human T lymphocyte (also called a T cell) from the immune system of a healthy donor.

Lymphocytes can be found

T cell lymphocytes are different from B cells and natural killer cells in that they have a protein called a T-cell receptor on their cell membrane. T-cell receptors are capable of recognizing various types of specific antigens (substances that provoke an immune response). Unlike B cells, T cells do not utilize antibodies to fight germs.

There are several types of T cell lymphocytes, each with specific functions in the immune system. Common T cell types include: 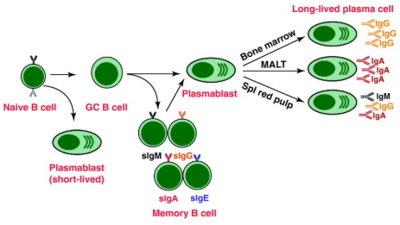 An important difference between T-cells and B-cells: B-cells connect to antigens right on the surface of the invading virus or bacteria; T-cells, connect to virus antigens on the outside of infected cells.

Our body has up to 10 billion different B-cells. Image: B cell activation naive to plasma cell.

B cells are necessary for adaptive or specific immunity, which focuses on the destruction of foreign invaders that have invaded the bodies initial defenses. Adaptive immune responses are highly specific and provide long-lasting protection against the pathogens that elicit the response. 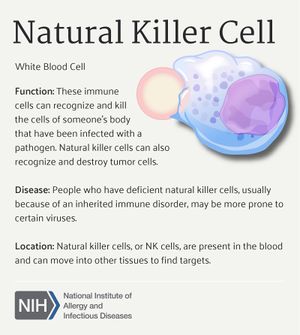 Natural killer (NK) cells are a part of the immune system a person is born with. They protect the organism from tumours and from cells infected by viruses. Natural killer cells are made active by chemicals released by damaged cells called interferons.

Natural killer cells can tell the difference between infected cells, tumours, and normal cells. They recognise changes in the level of a surface molecule called MHC (major histocompatibility complex) class I.

The NK cells then release cytotoxic (cell-killing) granules which then destroy the altered cells[3].

When white blood cells are counted, the lymphocyte count is the percentage of lymphocytes present.