Lumbar Facet Joint Syndrome: Causes and Preventions in the Workplace 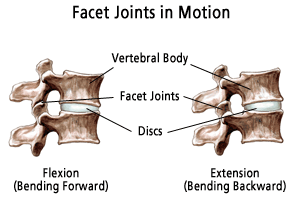 With rapid development of the world, manual labour demands are getting higher, bringing many threats to workers’ well-being and the rise of many musculoskeletal disorders on the lower back. Lumbar facet joint syndrome, accounts for up to 40% of lower back pain[1] and has been a very prevalent issue in the current society across all age spans.[2] Based on the data of previous studies, as people grow older, the risk of facet joint syndrome gets higher.

Lumbar facet joint syndrome (LFJS) is an articulate disorder on the lumbar facet joint, which is also called the zygapophyseal joint (z joint), impacting the innervation which creates pain and tenderness in the lower back region. Patients with this syndrome can experience pain in the lumbar facet joint or joint capsule which may spread down to the limb if the syndrome is severe. Some functional movements that involve movement of the trunk will also be affected.

The anatomy of the lumbar facet joint prevents excess rotation and extension but allows greater range of flexion. In a neutral position, the articular surface runs vertically, the superior articular processes face medially from the lower vertebral body and the inferior articular processes face laterally from the upper vertebral body. These two processes are parallel and face each other, which form the facet joint. The joint is surrounded by facet capsule to further stabilize the joint.

Repetitive lumbar movements, especially extension and axial rotation, would also lead to LFJS. When the lumbar spine is extending, the inferior articulate process moves inferiorly and posteriorly until the two spinous processes impact each other and restrain the extension movement. The loading force on the facet joints is greater in an extended position compared to the force in a neutral position.[1] The lumbar extensor muscles further increase facet loading during active lumbar extension, which further speeds up the degeneration process.[4] During axial rotation, the superior articular process and inferior articular process impact each other and prevents excessive rotation to occur. This protects the intervertebral disc from excess rotation.[1] However, because of the mechanism, the impact force on the facet joint during axial rotation can lead to the degeneration, causing LFJS. The excess movement of the lumbar facet joint also causes microdamage and degeneration to the facet capsule which can lead to further facet joint degeneration.[1] Repetitive lumbar movements causing lumbar facet joint syndrome is also backed up by numerous studies on athletes, specifically those who participate in sports that involve repetitive trunk rotation and extension, such as tennis. In a study on a group of elite adolescent tennis players, done by Alyas and colleagues, it was found that facet joint syndrome was prevalent among 70% of the sample.[5] Many golf players also experience lower back pain which is surprising since many people do not consider golf as a high-risk sports. During the swing phase, the lumbar spine is exposed to explosive axial torsion force, which is one of the risk factors for LFJS.[6] In addition, the misconception of people that golf is not a risky sport leads to people participating in it without practice and caution, which further increases the risks of injury.[6]

Lordotic posture can also cause LFJS. In a lordotic posture, lumbar curve of the spine is more defined and the lumbar joint is in a prolonged extended position. More pronounced lumbar curve increases the anterior shear force and promotes vertebral slippage in an anterior direction, as well as disc space narrowing, which can lead to overloading of the lumbar facet joints and eventual facet joint arthritis.[7][8] [9]

Rapid industrialization has posed an increased risk of musculoskeletal injuries and disorders. Lower back pain (LBP) is especially one of the most common complaints among manual labourers and lumbar facet syndrome is one of the leading causes of LBP. As society has brought up more awareness on this issue, many companies are implementing interventions to lower the incidence and impact of LBP. One of the most commonly used methods is to educate workers on safe methods for performing their essential duties, since this method is accessible and less financially burdensome. For example, health and safety professionals would teach workers safe ways to do their tasks during the training session (i.e. lifting weight with squat style instead of bending at the back, taking steps to turn instead of twisting the trunk). However, studies have found that this occupational training has no significant effect on preventing low back pain among workers.[10]

Workstation redesign is another popular intervention to prevent the LFJS and general LBP. The purpose of this intervention is to decrease the unnecessary movement of the trunk. Professional ergonomists would use tools from National Institute for Occupational Safety & Health (NIOSH) to determine if the workstation is safe and poses minimal risk to the worker. Workstation redesign could use modifications such as increasing the height of the workstation to minimize the need for a worker to bend to complete their work; or ensuring the most frequently used tools are directly in front of the worker to minimize the need to reach. However, each worker has different anthropometric data and companies cannot meet everyone’s needs. Very often, redesigning a workstation is impossible due to limitations associated with space and budget.

The development of new technologies such as the Inertia Measurement Unit (IMU) sensor technology has been incorporated into construction industry. IMU sensor is a wearable and real-time movement feedback equipment. It has two parts and one is placed on the middle of upper back and another one is placed on the back of the head. These parts can process the data in real life and detect ergonomically hazardous postures and motions on the torso and neck, then send alarm signal onto the user’s smartphone application. This real-time feedback allows the user to adjust themselves and avoid hazardous postures [12]. IMU sensors enable worker’s awareness and self-management of ergonomically hazardous postures and motions of the torso and neck, and should be implemented in other industries in the future.[11]

The management of LFJS is a multifold process. The rehabilitation should be a holistic approach. It should focus on:

Read more about it here.

In conclusion, the causes of the LFJS can be categorized into three points: 1) degeneration of the intervertebral disc that causes the degeneration of lumbar facet joints; 2) repetitive lumbar joint movement; 3) lordotic postures. In many workplaces, many workers struggle with LFJS yet there has not been any effective method to manage it. Educating workers is still the most used prevention but has been proven to be ineffective. Workstation redesign is a good prevention but companies are not able to accommodate due to limited space and budget. The new real-time motion feedback technology is promising to prevent workers to perform risky postures, but it still needs time for further development and on-site tests.