Many veterinary anatomical terms are similar to those used in human anatomy, but there are some important terms to know if you are working with animals.

Animals stand on all fours:[1] 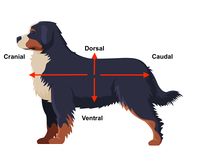 Animals are quadripedal – i.e. their vertebral column is parallel to the ground:[1]

Terminology relevant to the limbs:[1]

Terminology referring to the thoracic or forelimb:[1] 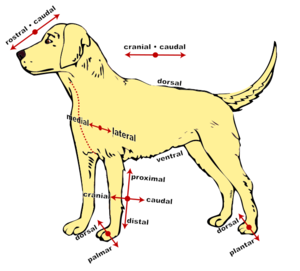 Terminology referring to the pelvic or hind limb:[1]

This short video will describe more:

Terminology to indicate relative distance from the centre of the limb:[1]

Terminology to indicate the relative distance from the surface of the body:[1]

Terminology to describe the basic movement of the parts of the body:[1]