This article or area is currently under construction and may only be partially complete. Please come back soon to see the finished work! (18/06/2022)

Hypoxic Ischemic Encephalopathy (HIE) is a condition in which injury to the brain of a neonate occurs following deprivation of oxygen supply to brain. [1]It is the common cause of neonate mortality and developmental psychomotor disorders in the pediatric worldwide.[2]This is one of the major cause for cerebral palsy.

Attributing neonatal encephalopathy to perinatal hypoxic–ischemic injury requires combinations of parameters indicative of metabolic acidosis in the first postnatal hours with low cord pH (<7.0), base deficit of over 12, and evidence of a need for respiratory support also starting in the first minutes, with low Apgar scores at and beyond 5 min. 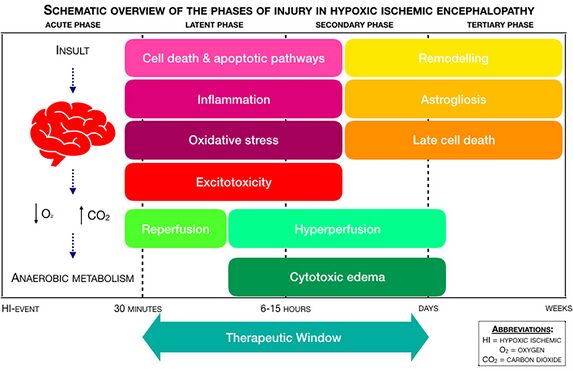 There are three classification system of HIE

Harvey B. Sarnat and Margaret S. Sarnat first published a study related to the Sarnat staging system with 21 neonates with encephalopathy attributed to a “well-defined episode of fetal distress or an Apgar score of ≤5 at 1 or 5 min after delivery.”. Their staging system for the sequential evolution of clinical signs and electroencephalogram (EEG) changes was intended to facilitate formulation of prognosis for neurologic outcome.

Later, modifications of the Sarnat Scoring System have been employed in the major trials of therapeutic hypothermia for neonatal hypoxic–ischemic encephalopathy (HIE) to identify neonates at highest risk for abnormal neurodevelopmental outcome.

By design, the Thomspon score did not require specific training or depend on the availability of advanced technologies (e.g., magnetic resonance imaging, computed tomography, cerebral function monitoring).

The score consisted of clinical assessment of nine signs: tone, level of consciousness, seizures, posture, Moro, grasp, suck, respiratory pattern, and fontanelle findings. Each sign was scored from 0 to 3, making highest score of 27 and lowest score of 0.

It has performed daily until a score of 0 was achieved or the infant was discharged from the hospital.

Depending upon the severity of brain damage and medical treatment, usally:

Mild or moderate cases could be cured completely, but severe cases represent poor prognosis with high mortality or cerebral complications such as mental retardation and cerebral palsy.