The Hunter's canal (subsartorial, adductor canal) is an aponeurotic tunnel in the middle third of the thigh, extending from the apex of the femoral triangle to the opening in the adductor magnus, the adductor hiatus.[1]

It is 15cm long and serves as a passageway for structures moving between the anterior thigh and posterior leg.[2] 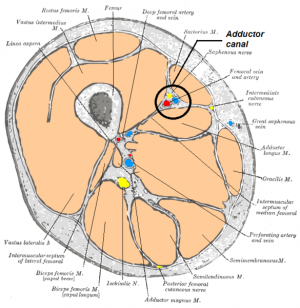 Boundaries of the adductor canal.

The Hunter's canal is bordered by muscular structures:

It is covered in by a strong aponeurosis, the anteromedial intermuscular septum (subsartorial fascia) which extends from the vastus medialis, across the femoral vessels to the Adductor Longus and adductor magnus. Lying on the aponeurosis is the sartorius (tailor's) muscle.[1]

The canal contains the following: 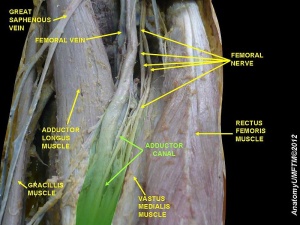 It consists of three foramina: superior, anterior and inferior.

In the adductor canal block, local anaesthetic is administered in the adductor canal to block the saphenous nerve in isolation, or together with the nerve to the vastus medialis. The block can be used to provide sensory anaesthesia for procedures involving the distal thigh and femur, knee and lower leg on the medial side. The sartorius and femoral artery are used as anatomical landmarks to locate the saphenous nerve.[2]

Adductor canal compression syndrome describes entrapment of the neurovascular bundle within the adductor canal. A rare condition, it is usually caused by hypertrophy of adjacent muscles such as vastus medialis. It is most common in young males, who may present with claudication symptoms due to femoral artery occlusion (more common) or neurological symptoms due to entrapment of the saphenous nerve.[2]