Glioblastoma Multiforme develops from star-shaped glial cells that support nerve cells. A glioblastoma multiforme is classified as a grade IV astrocytoma. It is also referred to as a glioblastoma or GBM[1] 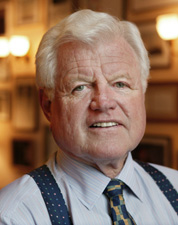 Glioblastoma multiforme (GBM) is the most common and most malignant of the glial tumors.

Gliomas are a heterogeneous group of neoplasms that differ in location within the central nervous system.  There is no particular age or sex distribution.  Growth potential, extent of invasiveness, morphological features, tendency for progression, and response to treatments vary between each case diagnosed.
GBM can spread through the brain tissue, but rarely spreads to other areas outside of the central nervous system.
All GBM tumors have abnormal and numerous blood vessels, a common feature of a fast-growing tumor. These blood vessels deliver necessary oxygen and nutrients to the tumors, helping them grow and spread. In addition, these blood vessels easily mix with normal brain tissue and travel away from the main tumor, which makes GBM tumors a challenge to treat.[2] 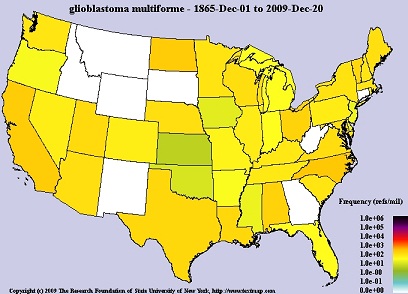 Approximately 60% of the estimated 17,000 primary brain tumors diagnosed in the United States each year are gliomas.
Glioblastoma multiforme is the most frequent primary brain tumor. In most European and North American countries, incidence is approximately 2-3 new cases per 100,000 people per year. [2]
(Photo courtesy of: TextMed)


The most common presentation of patients with glioblastomas is a slowly progressive neurologic deficit, usually motorweakness. However, the most common symptom experienced by patients is headache.

Patients may present with generalized symptoms of increased intracranial pressure (ICP), including headaches, nausea and vomiting, and cognitive impairment.

Headaches can vary in intensity and quality, and they frequently are more severe in the early morning or upon first awakening.

Changes in personality, mood, mental capacity, and concentration can be early indicators or may be the only abnormalities observed.

Seizures are a presenting symptom in approximately 20% of patients with supratentorial brain tumors.[2]

Some associated co-morbidities include:

Click here to see other associated diseases and complications 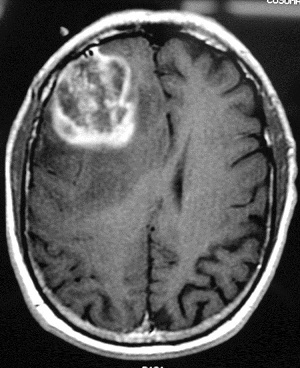 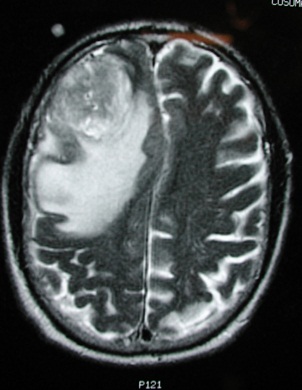 T2 weighted image demonstrates the same lesion as in the previous image, with notable edema and midline shift. This finding is consistent with a high-grade or malignant tumor.

The etiology of glioblastoma remains unknown in most cases. Familial gliomas account for approximately 5% of malignant gliomas, and less than 1% of gliomas are associated with a known genetic syndrome.

However, a recently released multinational report concluded that studies that are independent of the telecom industry show that cell phone use may pose a significant risk for brain tumors, and some European countries have taken steps to limit cell phone use by children.[2]

According to Dr. R. Sawaya, in the journal "Neurosurgery," systemic complications occur in approximately eight percent of patients undergoing craniotomy for tumor[6]. 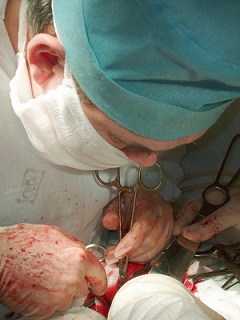 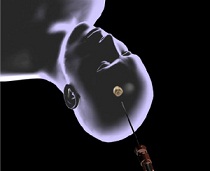 (Photo courtesy of: The Internet Journal of Emerging Medical Technologies)

No universal restrictions on activity are necessary for patients with glioblastomas. The patient's activity depends on his or her overall neurologic status. The presence of seizures may prevent the patient from driving. In many circumstances, physical therapy and/or rehabilitation are extremely beneficial. Activity is encouraged to reduce the risk of deep venous thrombosis.[7]

Exercise is good for GBM patients as long as it is to the patient's tolerance.  Functional strengthening and aerobic training should be progressed slowly.  These patients will benefit greatly from low intensity exercise.  Physical therapists should establish the patient's pulmonary function and fitness level (especially if the patient becomes deconditioned after surgery and/or diagnosis).

Patient and family education is crucial to the improvement of each case of GBM.  Each patient needs to be made aware of the symptoms, progression and treatment of this cancer.