Early intervention services are a set of interventions that support and provide resources for families of special needs infants and toddlers, aged between 0 and 3 years old.[1] Children with developmental disabilities are entitled to various services including: 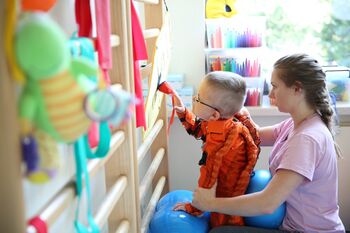 Evaluations and follow-up care are provided in the child's least restrictive or natural environment, typically at their home or daycare centre.[2] Traditionally, early intervention has worked off an expert model where the therapist created goals and provided follow-up care based on the impairment. Any interventions provided by the family were adjuncts to those provided by the healthcare professional. The overall care and decision making for the child was in the hands of the therapist. This model is referred to as a rehabilitation model.[3]

Over the past decade, there has been a shift from the therapist-driven model to a family education/empowerment model. The family-centered care (FCC) model provides collaboration between the therapist and family where the goals and aspirations of the family are central to the intervention.[1] The therapist works as a “coach” helping families identify needs, goals and solutions. FCC, thus, transfers decision-making from just the therapist to the family, who are empowered to create goals and plan intervention strategies.[1] When families are involved in the care and decisions of their child, the family and the child reap better outcomes.[3] Additionally, research has shown the FCC model to result in greater parent satisfaction, reduced cost of healthcare, behavioural/emotional support to a child and a faster recovery.[4]

Traditionally, early intervention was problem-oriented with a focus on identifying impairments in the body. Interventions were targeted at fixing the dysfunction and decisions about care were made solely by the therapist. However, with a solution focused coaching (SFC) model, the therapist and family work together to envision possibilities and seek solutions to the family's needs and targeted goals.[5] [1] Family empowerment is a priority in FSC. In addition, a solution focused coaching model looks towards the child's strengths and abilities rather than their problems to initiate goal setting and intervention planning.[1]

The most common physical disability in childhood is cerebral palsy (CP), occurring in every 1 in 500 births. CP is caused by brain injury early in development and presents with disorders in posture and movement leading to activity limitations.[6] Traditionally, a diagnosis would be concluded between 12 and 24 months of age when symptoms were evident. New research, however, reveals that signs and symptoms of CP appear and develop before 2 years of age. Using a combination of medical history, neuroimaging and standardised motor and neurological assessments for infants under 2, the risk of cerebral palsy can be now be predicted.[7] Using diagnostic-specific early assessments can lead to referral of services which will strengthen caregiver well-being, prevent secondary complications and optimise infant cognitive and motor plasticity.[8] The tools below are commonly used for infants aged under 2 to estimate the risk of a cerebral palsy diagnosis. 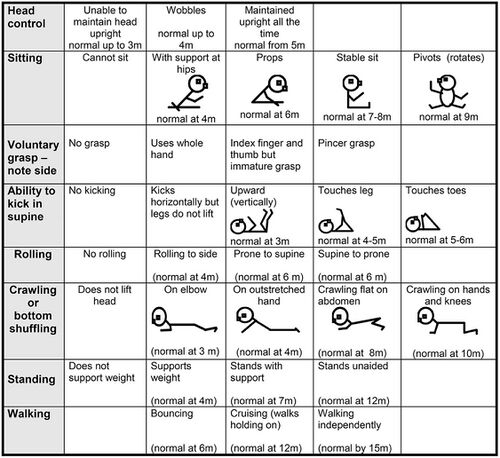 The Hammersmith Infant Neurological Examination (HINE) is free tool with good interobserver reliability that is typically used on infants aged between 3 and 24 months. It has shown high sensitivity in detecting CP in infants, (98% in infants under 5 months old, 90% in infants over 5 months old).[7] Neurological function is tested with 26 different criteria based on movements, behaviour, cranial nerve function, protective reactions, reflexes and gross and fine motor function. Symmetry between left and right sides are also scored.[1] Test results not only identify children at risk, but detail the severity and type of motor impairment. Having this specific information allows early intervention to be targeted to the specific neurological sequelae.[6]

Scores range from 0-73. Romeo et.al[6] found that infants tested between 3 and 6 months showed the following pattern:

The Gross Motor Function Classification System (GMFCS) tool classifies children aged under 2 into five distinct levels depending on their self-initiated movement. It specifically focuses on mobility, transfers and sitting. These criteria relate to functional limitations for the child versus quality of movement.[10]

Gross Motor Function Classification System – Expanded and Revised (GMFCS – E & R) for children aged 2 and under is as follows:[10]

*** Less favourable outcomes are noted in low and middle income countries with over 73% of children classified as GMFCS level of III-IV.[11]

The Prechtl General Movement Assessment is a general movement tool where clinicians watch a short video of a supine infant.  Quality and type of movements are scored as “normal” or “abnormal” for 26 items.  Abnormal movements are further classified into one of three categories below:

Based on scores from this test, the presence, type and severity of CP can be predicted. This tool is reliable and quick, but does require training.[1] 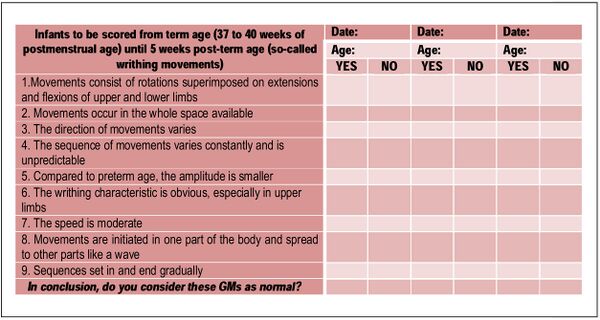