The muscles of the face are striated muscles which originate from bones of the skull or the face, and are used in functions of eating and drinking, speech and non-verbal communication.

The facial muscles have different characteristics compared to muscles in the trunk and limbs:

The muscles of the upper portion of the face can be divided into 2 groups:

We will examine the 2 groups separately.

There are 3 Orbital Facial Muscles:

Occipitofrontalis is one of the muscles of the scalp. It consists of 2 separate bellies:

Revolving image of the Frontalis muscle

Nerve supply is the Facial Nerve (CN VII), with the occipital belly supplied by the posterior auricular branch, and the frontal belly by the temporal branch.

Blood supply of the occipital portion is from the occipital artery, and the frontal segment is supplied by the supraorbital and supratrochlear arteries.

The frontalis portion elevates the eyebrows, which causes the horizontal wrinkles in the forehead.

It also weakly moves the skin of the scalp anteriorly

In facial palsy, paralysis of the frontalis muscle[1] results in lack of ability to raise the ipsilateral eyebrow; it also results in absence of horizontal lines/wrinkles on that side of the forehead. In older patients, there may also be some descent of the affected eyebrow, which as well as producing visible asymmetry of the eyebrows can impact on vision in that eye, if the brow ptosis is sufficient to obscure the upper field of vision. Brow ptosis can also lead to a secondary misdirection of the upper eyelid lashes which can irritate/scratch the eye.

Surrounding the eye is the orbicularis oculi[2], a sphincter muscle which consists of 3 sections: the orbital, the palpebral and the lachrymal portions. The fibres are arranged in concentric circles round the upper and lower eyelids. The palpebral fibres form the eyelids. 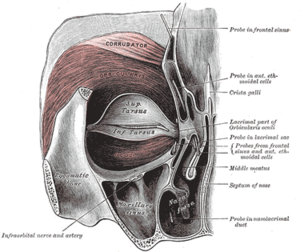 The fibres originate from the anterior surface of the medial orbital margin, the rim of the eye socket, and the lachrymal sac. They travel laterally, both above and below the eye, to insert into the lateral palpebral raphe. At the peripheral borders of the muscle, the fibres interdigitate (merge in an interlocking fashion) into the bordering muscles, ie. the upper fibres interdigitate with the frontalis and corrugator muscles.

The action of the orbicularis oculi muscle is to close the eye.

The palpebral fibres, which form the eyelids, are responsible for blinking.

The lachrymal fibres facilitate drainage of tears by helping to empty the lachrymal sac, and the orbital section of the muscle is responsible for providing a tight eye closure/seal[2].

The action of orbicularis oculi muscle helps with distribution of the tear film over the cornea[3].

Paralysis of the Orbicularis Oculi muscle results in incomplete closure of the eyelids, and this has a profound effect on the condition of the cornea of the eye. If not managed well, the lack of closure can result in drying out of the cornea, often accompanied by significant pain, scarring of the cornea, and can progress to ulceration, and in extreme cases perforation of the cornea[3][4]. This means that signs of an acute Dry Eye in patients with Facial Palsy should have urgent evaluation by an opthalmic team.

There is further information on general management of the eye on the Dry Eye page.

Lying above the orbicularis oculi muscle and below occipitofrontalis, Corrugator Supercilii is a small muscle which is located at the medial end of the eyebrow. The Latin name means "Wrinkler of the Eyebrows": Corrugator from the Latin verb to wrinkle, corrugo, and the Latin word for eyebrow is supercilium, which in the plural becomes supercilii.

It originates from the superciliary arch (a ridge on the frontal bone) and the fibres travel laterally and slightly upward to insert into the deep surface of the skin of the eyebrow.

It is supplied by the temporal branch of the Facial Nerve. Blood supply comes from the Superficial Temporal Artery and from the Opthalmic Artery.

This muscle pulls the eyebrow downward and medially, producing the vertical lines/wrinkles of the forehead.

This muscle acts when producing the facial expressions of sadness and puzzlement; it creates a "frown". It also acts to help shield the eye from strong light.

There are 2 major Nasal Facial Muscles:

Procerus, AKA Pryamidalis Nasi) runs between the nose and the forehead. The term procerus means tall or extended in Latin.

It arises from the superior surface of the nasal bones, and the upper lateral nasal cartilages.

Revolving image of the Procerus muscle.

The fibres travel upwards to insert into the skin of the inferomedial forehead, its fibres at this point merge with those of frontalis, in between the 2 eyebrows.

It derives its nerve supply from the temporal branch of the Facial Nerve.

Blood supply is via the Facial Artery.

This muscle pulls down the medial parts of the eyebrows, causing transverse wrinkles in the skin above the nose and between the eyebrows (this area is sometimes referred to as the glabella area).

Contraction of Procerus causes the facial gesture of a frown, along with Corrugator Supercilii. Procerus is responsible for producing horizontal lines over the bridge of the nose. Its main action is involved with facial expressions of sadness, bewilderment or anger.

Nasalis is split into two sections: alar (AKA Dilator Naris) and transverse (AKA Compressor Naris).

Both sections of the muscle originate from the frontal part of the maxilla.

The buccal branch of the Facial Nerve supplies both sections of this muscle.

Blood supply is porvided by the superior labial, septal and lateral nasal branches of the Facial Artery, and the infraorbital branch of the Maxillary Artery.

The two sections of this muscle have opposing actions: the alar section of Nasalis brings about widening of the nostril, and the transverse fibres compress the nostril.

Nasalis is an accessory muscle of respiration, being particularly active during deep breathing and times of respiratory distress; it also acts in emotional states such as anger.

AKA Depressor Alae Nasi, this muscle is sometimes absent or present only in rudimentary form.

Historically this muscle has been said to originate from the maxilla (superior to the central incisor), but some more recent studies report it originates from the fibres of orbicularis oris[5]. It inserts into the nasal septum.

This muscle derives its nerve supply from the buccal branch of the Facial Nerve (Cranial Nerve VII). Blood supply is from the Facial Artery.

Its action is to pull the nasal septum and the tip of the nose downward.

Although this muscle (when present) is active during inspiration and also during movements of the upper lip when talking, it does not seem to have any direct clinical relevance to facial rehabilitation. Indeed, one of the most comprehensive text books on the subject, "The Facial Nerve"[6] does not mention Depressor Nasi Septi.

Evaluation of the activity of the upper facial muscle group forms part of the assessment of Facial Palsy, which may be caused by Bell's Palsy, nerve damage in brain tumours such as Acoustic Neuroma (AKA Vestibular Schwannoma), Ramsay Hunt Syndrome, and other less common conditions.

The primary muscle to examine initially is the action of the Orbicularis Oculi, as this is the muscle responsible for producing eye closure, and thus maintaining the healthy condition of the cornea of the eye. As the facial nerve is responsible for lubrication of the eye, providing the lacrimal glands with a portion of their parasympathetic nerve supply, a common feature of inability (or reduced ability) to close the eye in facial palsy is reduction in tear production causing a Dry Eye. As Dry Eye can lead to development of a corneal ulcer, which in turn can cause severe damage to eyesight, it is essential that a physiotherapist assessing and treating someone with this is aware of the dangers, and provides appropriate advice and education to the patient, as detailed on the Dry Eye page.