The extensor hoods are triangular aponeuroses by which the extensor tendons insert onto the phalanges. 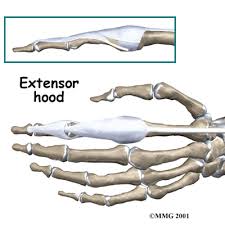 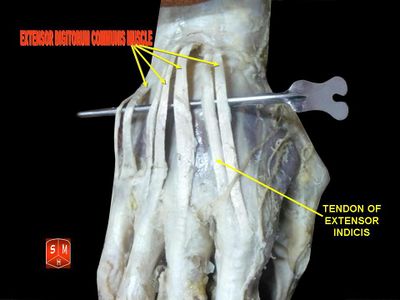 Extensor Hoods are an elaboration of the extensor digitorum comunis (EDC) tendon on the dorsum of each phalanx.

The extensor indicis (EI) and the extensor digiti minimi (EDM) insert into the extensor hoods of the second and fifth digits, respectively.

2. The central tendon (or "slip") proceeds dorsally to attach to the base of the middle phalanx, where tension can extend the proximal interphalangeal (PIP) joint.

4. The extensor hood surrounds the MCP joint laterally, medially, and dorsally, and receives tendinous fibers from the lumbricals and interossei.

5. Fibers of the oblique retinacular ligament (ORL) attach at the sides of the proximal phalanx and digital tendon sheaths and proceed to the distal portion of lateral bands. Thus, the ORL's line of application is volar to the PIP joint's lateral axis and dorsal to the DIP joint's lateral axis.

PIP extension (produced by other tissues in the extensor mechanism) elongates the ORL, creating passive tension that extends the DIP. The DIP extension helps open the hand. 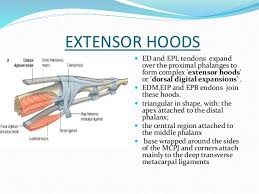