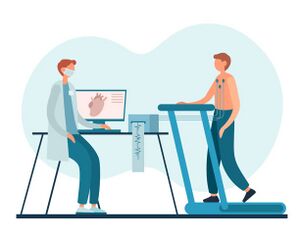 Exercise induced bronchoconstriction (EIB) is the phenomenon of narrowing of the airways (transient and reversible) during and after exercise that occurs in response to increased ventilation in susceptible individuals.[1] Exercise is the most common trigger factor in individuals with EIB. Clinical presentation may include dyspnoea, wheezing, cough, chest tightness, excessive mucus production or the feeling of a lack of fitness.[2] EIB can occurs in patients with or without asthma. EIB can be confirmed based on the variations in lung function triggered by exercise, rather than on the basis of symptoms. The two diagnostic methods include spirometric and bronchoprovocation techniques.[3] 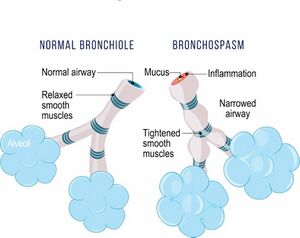 According to American Thoracic Society /European Respiratory Society guidelines, FEV1 maneuvers are recorded after exercise with the highest acceptable value recorded at each interval ( 5, 10, 15, and 30 minutes). A decline in FEV1 ≥10% from baseline after exercise or hyperpnoea is used a confirmation for positive EIB. The difference between the pre-exercise FEV1 value and the lowest FEV1 value recorded within 30 minutes post exercise is used to determine the severity of EIB