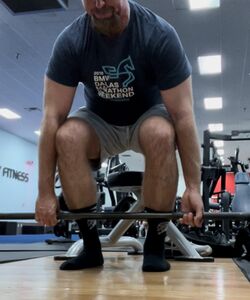 It was believed that the mechanics are similar to the squat, however, there are several differences. First, the deadlift the force production is not assisted with a stretch-shortening cycle as in the squat. This means that the deadlift starts with a concentric contraction and ends with an eccentric contraction[1]. Another is the load is applied perpendicular to the body and loaded on the horizontal plane. The squat is loaded in the vertical plane. This means that the deadlift could have benefits for horizontal plane activities such as sprinting and long jumps[1].

To perform a deadlift:

The deadlift exercise can be considered a full body exercise since it utilizes many muscles in both the upper and lower body.

The deadlift exercise can be modified in a number of ways depending upon the desired goals, sport, or limitations of the person performing the deadlift. Each variation will allow the person to focus on specific muscle groups or mimic a desired activity[3]. 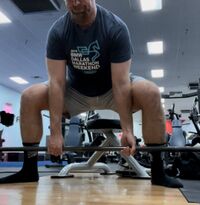 The conventional deadlift is often the most commonly thought of. The person stands with their feet approximately shoulder width with the arms outside their thighs. There is increased emphasize on the lower back due to the trunk having more of a forward lean.

The person sets up with a wider stance with the arms inside the thighs. The trunk stays in a more upright stance utilizing the hips more than the back.

The person stands with the feet about shoulder width and the knees stay extended (not fully locked out). The trunk says in a neutral position and the downward motion comes from the hips flexing and moving posteriorly. The focus is on the lower back and hamstrings.

The person stands with the feet about shoulder width but now the knees are flex approximately 15 degrees. The trunk says in a neutral position and the downward motion comes from the hips flexing and moving posteriorly. The focus is on the lower back, gluteals, and hamstrings.

The person can utilize whatever stance they prefer, but the difference is the bar starts at a higher height using a rack. The height of the bar can be adjusted to whatever height the person would like. This allows the person to either focus on lifting heavier weights, training weak points, or mimicking a similar activity.

The person utilizes whatever stance they prefer but they typically are on an elevated surface so the bar is lower than it would typically be. This allows the person to focus on the initial pull of the deadlift, training a weak point, or mimicking a similar activity.

The person uses a conventional set up but instead of gripping the bar just outside the thighs, the person uses a much wider grip. Using this wider grip puts more emphasis on the stabilization of the scapula and upper back musculature.

The variations to deadlifts are not limited to the type of deadlift itself. Additional modifications can be made to change the exercise.

The use of resistance bands and chains can add increasing or even decreasing resistance throughout the range of motion of the deadlift.

Most people use 1 of 2 grip variation, double overhand (both hands around the bar with palms facing them), or opposing grip (one palm facing in and the other out). To challenge the grip, a larger diameter bar could be used or having something wrapped around it. Another grip could be a fingertip grip, which the bar is held more in the fingers, rather than the palm "digging into" the bar.

The speed at which the lift is performed can be changed. A person could perform a repetition as quickly as possible or at a slower than normal rate.

Deadlifts and low back pain:

One study found that a 8-10 week deadlift training program did improve pain and function at a 15 month follow up with people with discogenic low back pain[4].

A systematic review found there is Level B evidence that deadlifts are a clinically effective option for the treatment of mechanical low back pain, with improvements in pain and functional outcomes[5].