The concept of Capsular Constraint Mechanism can be applied to a tight join capsule of the shoulder where the humeral head translates in the direction opposite to that of capsular tightness.[1] This concept is typically applied to the shoulder to understand the arthrokinematic movement within the shoulder joint. 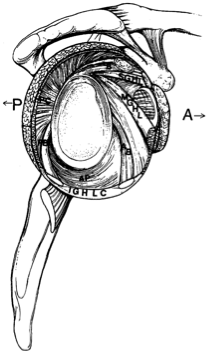 Note the thickness of the shoulder joint capsule and soft tissues inserting around it, in comparison to the articular surface of the glenohumeral joint. This emphasizes how adhesion's at the capsule can exert a pull on the joint during mobilization.
The Articular surfaces of the glenohumeral joint include the large convex almost spherical Humeral head articulates with the concave Glenoid fossa of the scapula.[2] This ball and socket type of joint permits large translations within the joint and as it lacks bony stability and has a strong stabilising mechanism including the static(ligaments and capsule) and dynamic(muscles) stabilizers.[3] This joint is enveloped with a synovial capsule consisting of the anterior part, posterior part, and axillary pouch.The anterior aspect of the capsule has the anterior and axillary pouch which are reinforced with the glenohumeral ligaments (superior, middle and inferior). On the anterior-superior aspect is also the insertion of the rotator cuff tendons.The posterior aspect of the capsule is reinforced by the Biceps tendon superiorly and the posterior band of the inferior glenohumeral ligament at the inferior aspect.[4]

Shoulder joint mobilisation follows a definitive pattern based on the concave convex rule. This has been explained in Manual Techniques for the Shoulder. When we apply the concept of capsule constrained theory we need to understand the pathology site before mobilisation. For example in frozen shoulder, the pathology site is the rotator interval capsule which is on the anterior aspect of the capsule and the typical presentation is the capsular pattern restriction with external rotation being maximally restricted followed by medial rotation and abduction. Mobilization for Adhesive Capsulitis traditionally follows Kaltenborns' Convex-Concave rule which states that when a convex surface moves over a concave surface the direction of glide or arthrokinematic movement must be opposite to that of the osteokinematic movement. Taking the example of Adhesive Capsulitis, capsular pattern restriction is seen with maximal restriction of external rotation. An anterior glide would improve the restriction and range of motion.However based on the Capsule Constraint Mechanism, the capsular restriction is at the anterior aspect of the shoulder, hence, a posterior glide would stretch the tight capsule rather than an anterior glide.

Many studies have backed the proposition of the Capsule Constraint Theory. Operative tightening of the posterior portion of the shoulder joint capsule did increase the anterior-superior direction translations or glides in flexion and cross body movement of the hand.[5] However some studies demonstrate that capsular thickening is inconsequential to altering glenohumeral kinematics. In cadaveric specimens it has been demonstrated that in lateral rotation of the humerus a posterior glide occurs within the joint, however this translation did not change with the stretching of the capsule.[6] A similar cadaveric study demonstrated how a posterior contracture in the capsule didn't alter glenohumeral kinematics.[7]