When the area over which a force is distributed is made larger the pressure is reduced. If someone steps on your foot in a stiletto (a fine point high heeled woman’s shoe) there is a lot of pressure (and pain).

The same person standing on your foot in a heel that is larger it would cause less pressure (and pain) because the area is bigger. The fact that it is the same person means that the Force is constant in this scenario. 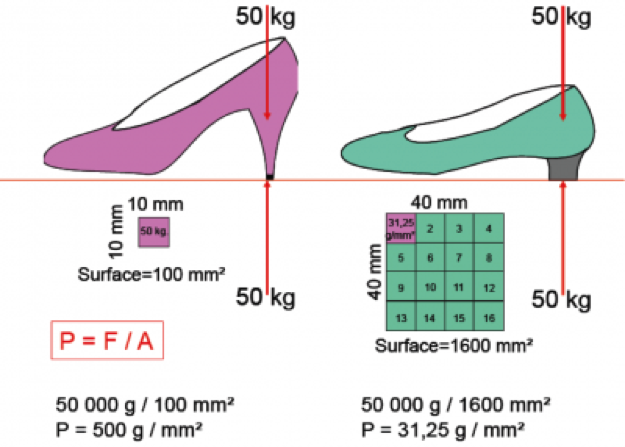 The heel of a stiletto shoe would cause large pressure per unit area. When the area is increased (in the picture on the right) the pressure is decreased. (Adapted from the Green Book by - Hmayak Tarakhchyan, used with permission).

In the below example we see the pressure also reduced by demonstrating the effect of increasing the area of contact under the foot. 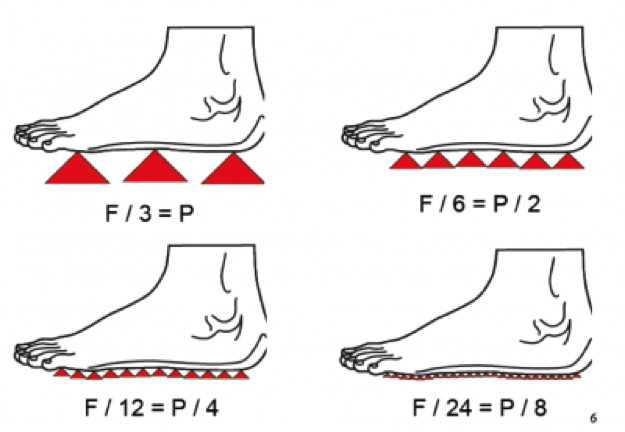 (Adapted from the Green Book by - Hmayak Tarakhchyan, used with permission)

In this take on the classic “bed of nails” scenario we see that the Pressure is reduced as the area is increased. The force again remains constant.

The orthotist needs to ensure that the orthotic design achieves the best possible pressure distribution. Traditional orthoses made from metal and leather generally have lower surface areas, meaning the pressure at the tissue/device interface will be higher[1]. 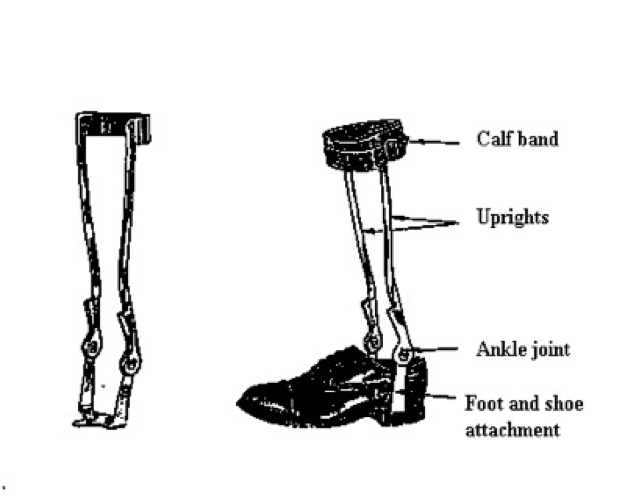 More modern thermoplastic cover larger areas of the body and therefore distribute the force over a larger area. This leads to lower pressures upon the skin. 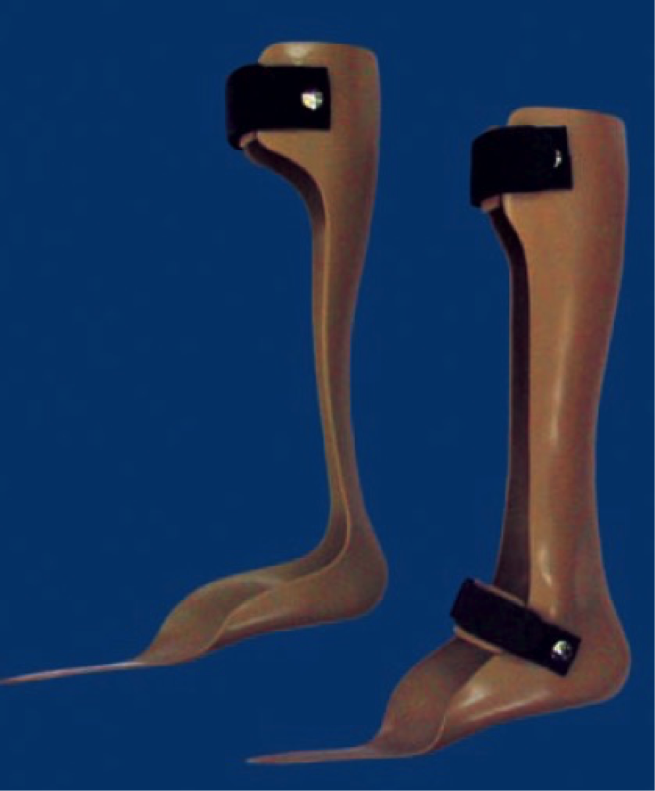 Plastic AFO with total contact, reduces pressure as the force is distributed over a wider area.

It would therefore seem that we should always use an orthotic design that covers the maximum surface area to ensure a comfortable fit. However, we must also take into consideration the ability of the underlying tissues to tolerate the pressure applied by the orthosis, as bony prominences, scar tissue and other sensitive sites may not tolerate the directly applied pressure. During the cast rectification process, reliefs or build ups may be applied over bony prominences to load areas of tissue that are tolerant and unload the bony prominence. 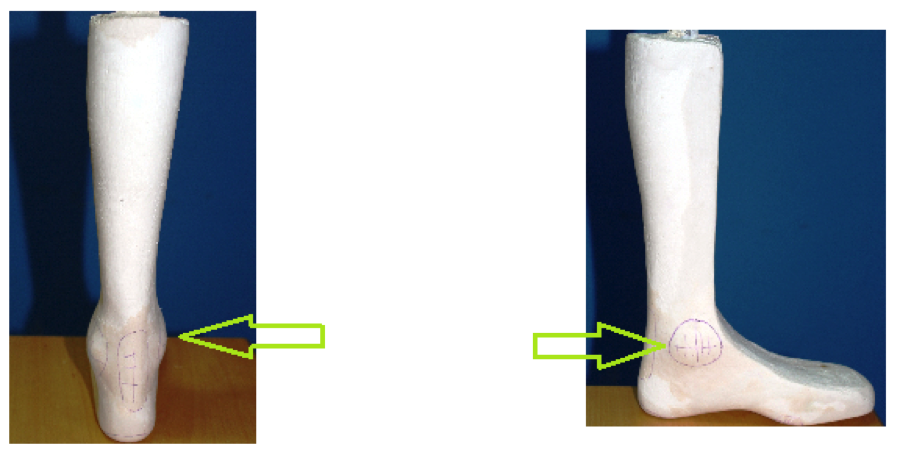 Arrows indicate where plaster build-up has occurred. This will alter the shape of the final AFO to decrease pressure at this point.

Padding fabricated from either low density Pelite, EVA, or PPT may also be incorporated over bony prominences during the manufacturing of the device to further reduce the pressure over these areas as it compacts when loaded.

If a part of an orthosis is causing uncomfortably high pressure the service user or parent/carer might ask for this part to be removed. Sometimes when this is done the area that the force is spread over is reduced. Hence by the above equation P=F/A, the pressure is actually increased. This can lead to increased pain after some time.

An orthosis applies forces directly to the child’s skin and underlying anatomical structures to achieve its functional goals. Therefore, the areas of contact between the soft-tissue interface and the orthosis are extremely important, as if the orthosis is not comfortable the child will not wear it[2].

Tissue at the orthotic device/tissue interface is not always a uniform thickness. In Figure… we can see the tissue area ‘F’ is relatively firm and the tissue areas ‘S’ are softer.

(Adapted from the Green Book by - Hmayak Tarakhchyan, used with Permission)

(Adapted from the Green Book by - Hmayak Tarakhchyan, used with Permission)

Orthotists use 3 point pressure in most orthotic designs to control angular movement[3].

The three-point force system permits angular change or control over a joint, for example when controlling ankle plantarflexion in an AFO or genu valgus in a knee orthosis. It occurs when three forces are applied to a segment with the single primary force (F1) applied between two additional counterforces (F2 and F3) and the sum of all three forces equal to zero. The magnitude and location of the primary force (F1) is at a point where movement is either inhibited or facilitated, depending on the functional requirements of the orthosis. Examples of common three-point force systems in the lower limb can be seen below.

Ground Reaction Force (GRF) occurs when contact occurs with a support surface, it is equalling and opposing the force due to body mass passing through the foot to the ground surface[5].

It should be noted that the ‘force due to body mass’ includes the momentum and accelerations of body mass as well as just the effect of gravity on it. Hence it is different and yet similar to the weight line.

The GRF is not used clinically in many places due to difficulty obtaining it in real time. Clinicians can try to understand the movements they see by understanding the effect the GRF might be having on the human body.

If a Force does not act directly on the COM of an object it will rotate the object[5]. If a force does not act through the middle of a joint with another segment it will change the angle of the joint. In the below example the foot and the leg should be considered as two segments, joined at the Talo-Crural Joint. As the GRF ‘pushes’ up on the foot it will tend to move the foot into dorsiflexion. The force produces a Torque that is the size of the force times the length of the lever arm (distance from the line of action of the force to the joint center).

In normal human movement the moment created by an externally applied Ground Reaction Force is balanced (for the most part) by an internally generated muscle force which provides an opposing moment.

This general rule is not always 100% true but is useful approximation. In the case of rapid or forceful motion these moments are not balanced. Also in the case of the knee reaching full extension in standing it is tension in the tissues of the posterior compartment of the knee which provide the balancing moment. 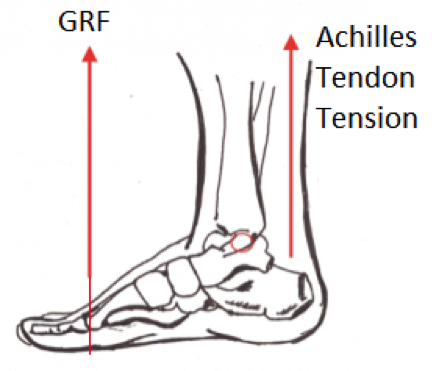 In this example the dorsiflexion moment created by the anterior GRF is balanced by the planter flexors through tension in the Achilles Tendon. This muscle has a fixed lever arm.

If the GRF is anterior to the knee then the GRF tends to extend the knee while the posterior joint capsule tension normally resists, holding the knee in a neutral position. (See A)

If the GRF happens to be just behind the knee, the GRF with the lever arm d2 flexes the knee. In this situation the quadriceps must be active to prevent knee flexion. (See B below.)

If the GRF is a larger distance behind the knee joint then there is a longer lever arm (d3) from the line of action of the GRF to the joint centre. This increases the magnitude of the torque/moment (force times lever arm) tending to flex the knee. This increases the requirement for the quadriceps, a stronger contraction of the quadriceps is needed.

One aim of orthotic therapy for children with CP is to normalise the position and timing of GRF movement as this will lead to normalised muscle activation patterns in children. When the knee is in significant flexion this increases the energy consumed by increasing the magnitude of required muscle contractions. 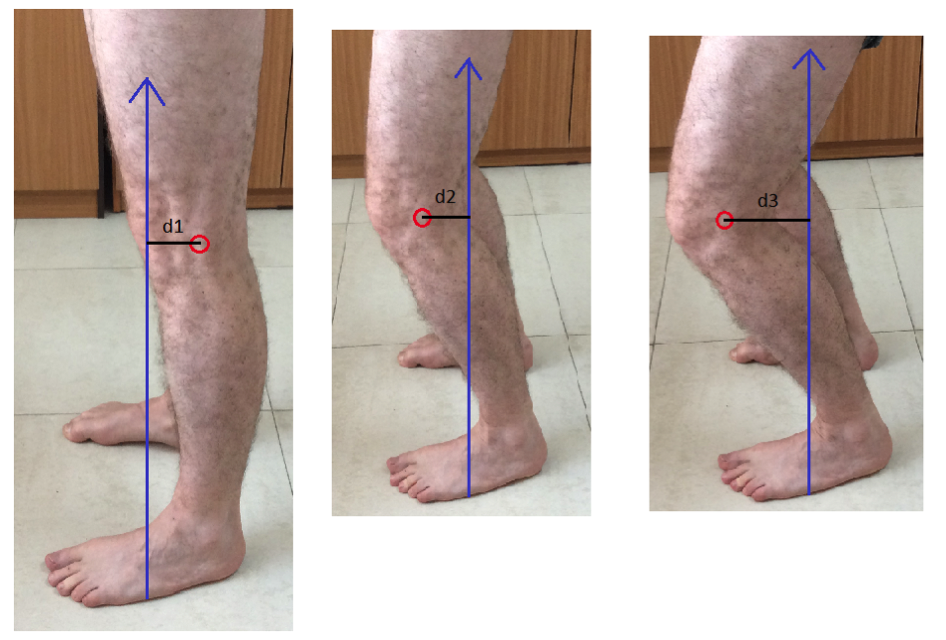 Orthotists can change the point of application of the ground reaction force through the design of an orthosis. By moving the foot into relative plantarflexion the GRF is moved anteriorly, increasing the knee extension moment.

For a more indepth look at how a ground reaction AFO (or floor reaction AFO) alters the extension moment of the knee look here.