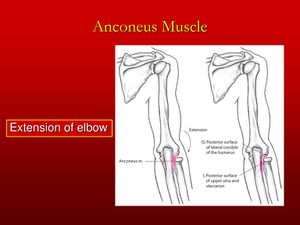 The anconeus muscle is a small, triangular muscle located at the elbow. It originates at the dorsal side of the lateral epicondyle of the humerus[1]

The anconeus inserts at the olecranon of the ulna, along the proximal third of the posterior face of the ulna[1].

The anconeus is supplied by a motor branch of the radial nerve (C6-C8), which arises at the radial sulcus of the humerus, continues through the medial head of the triceps and finally reaches the muscle distally. Both morphologically and functionally the anconeus constitutes a continuation of the triceps. Not only are they innervated by the same nerve, but also both muscles are very often either partly or completely blended together.

The anconeus is supplied by the posterior interosseous recurrent artery.

Functionally the anconeus fulfills the same tasks at the elbow as the triceps muscle. Its contraction leads to the extension of the forearm. Furthermore, it keeps the tension of the dorsal joint capsule, thus preventing damages during hyperextension. It is believed that the anconeus has the additional function of stabilizing the ulna, especially during pronation movements of the forearm.

An anatomical variation of the anconeus is found in up to one-third of all humans. Even though most are harmless, there is one variation which can be considered clinically relevant, namely the anconeus epitrochlearis muscle.

This muscle originates – contrary to the “normal” variation - at the medial epicondyle of the humerus, thus crossing the ulnar groove of the humerus bone where the ulnar nerve lies. In cases of hypertrophy (e.g. in weightlifters) the anconeus epitrochlearis can therefore compress the nerve leading to numbness at the ulnar border of the hand, the little and ring fingers, as well as elbow and forearm pain (cubital tunnel syndrome).

Anconeus trigger point causes pain right at and above the elbow. This way it can contribute to tennis elbow.

Accurate diagnosis of cubital tunnel syndrome, which might be caused by the hypertrophy of anconeus muscle, includes assessing sensory changes in the ulnar nerve distribution (½ of the 4th digit and entirety of the 5th), pain, atrophy of the intrinsic muscles of the hand innervated by the ulnar nerve, neural provocation test of the ulnar nerve. Tests used to confirm the diagnosis of cubital tunnel syndrome are those linking ulnar neuropathy and the elbow. These tests should evoke provocative signs as a reaction to confirm the syndrome, such as elbow flexion reproducing symptoms, positive Tinel’s sign tested at the elbow or a sign of instability, for example snapping of the ulnar nerve over the medial epicondyle with elbow flexion[2].

Depending on the condition, the treatment of pain of the anconeus muscle can be achieved by releasing the trigger point that is causing the pain. Below is a video that shows the procedure of capsule anconeus release: