There are approximately 785 000 new events, 470 000 recurrent events, and 195 000 events every year, many of which people are unaware they are in danger. Both spontaneous and percutaneous coronary intervention (PCI)-induced atherosclerotic plaque rupture are capable of initiating the atherothrombotic process. The following platelet response to an injury of a vascular nature is vital and, "is characterised by adhesion of circulating platelets to the vascular endothelium, subsequent activation and aggregation of platelets, and potential obstruction of the intravascular lumen."[1]

Acute coronary syndromes (ACS) are the leading cause of death in older adults, aged 65 years or older.[2] 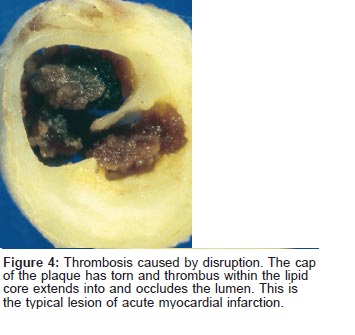 Vascular injury and thrombus formation are key components in the initiation and progression of atherosclerosis and in pathogenesis of acute coronary syndrome. [5] Atherosclerotic plaque formation occurs as a result of damage to the endothelium of the blood vessel. The damaged endothelium stimulates a cascade of inflammatory events that causes macrophages to digest low-density lipoprotein (LDL) transforming into foam cells and causing formation of fatty streaks in the sub endothelium. [6] Several coronary risk factors can influence this process, including hypercholesteremia, hypertension, diabetes, and smoking.[6] ACS takes place when a disrupted atherosclerotic plaque in a coronary artery stimulates platelet aggregation and thrombus formation. Previous research has suggested that the narrowing of the coronary artery causes a decrease in blood flow and ultimately ischemia, however, recent studies have suggested that the rupture of an unstable atherosclerotic plaque is chiefly responsible for thrombus formation and infarction. Autopsy studies have shown that plaque rupture causes approximately 75% of fatal myocardial infarction in comparison to superficial endothelial erosions which account for only 25%.[7]

The extent to which a coronary artery is occluded often correlates with presenting symptoms and diagnostic findings[9]. Angina or chest pain is considered the cardinal symptom of ACS. Other symptoms that are commonly associated with ACS include; pain with or without radiation to left arm, neck, back or epigastric area, shortness of breath (SOB), diaphoresis, nausea and light headedness. It is important to note that women often present with atypical symptoms which may ultimately delay diagnosis and treatment.[9] These clinical manifestations include; fatigue, lethargy, indigestion, anxiety and pain radiating down the back.[9]

Physiotherapy and Other Management[edit | edit source]

Acute coronary syndrome can best be prevented by better controlling modifiable risk factors such as; diet, exercise, management of hypertension and diabetes and smoking cessation. In accordance with the NICE guidelines, clinicians should advise people to eat a Mediterranean-style diet, be physically active for 20-30 minutes a day to the point of slight breathlessness, and provide assistance of smoking cessation interventions. Policy changes have taken effect in Scotland which showed a significant decrease the number of admissions for Acute Coronary Syndrome as a result of the The Smoking, Health and Social Care Act which prohibited smoking in all enclosed public places and workplaces. Cardiac rehabilitation and education can improve mortality outcomes