Wrist replacement, also referred to as wrist arthroplasty is a surgical procedure in which the diseased or damaged joint is replaced with an artificial joint- a prosthesis. It aims to create a stable, pain-free joint with a functional range of movement when conservative treatments have failed.

Total wrist arthroplasty (TWA) is a motion preserving alternative to arthrodesis of the wrist and usually lasts for about 10 to 15 years. Implant survival of 90-100% at five years are mostly reported using newer second generation and third generation implants, but declines from five to eight years.[1]

Total wrist replacements are non weight bearing joints; heavy household or occupational activity, use of a walking aid or repetitive movements e.g. hammering will increase the speed and incidence of loosening of the implants stems and the ultimate failure of the implant. The ideal patient for a TWA should have a low demand lifestyle, should not need the upper extremity for regular ambulation and transfers. Young active patients and individuals with high physical demands are not considered good candidates for TWA.[2][3]

The wrist/radiocarpal joint is a ellipsoid type of synovial joint. The wrist consists of two rows of carpal bones which forms the proximal segment of the hand and articulates proximally with the forearm via the wrist joint and distally with the five metacarpals. The ends of the bones are covered with articular cartilage. Cartilage is an elastic connective tissue whose purpose is to allow for a smooth, gliding motion between joints.[1] Movements occurring in the wrist include flexion, extension adduction and abduction. Diseases such as osteoarthritis and rheumatoid arthritis, injury and infection can damage or wear out the articular cartilage. This may cause the wrist bones to rub against each other producing pain, stiffness and swelling of the wrist. 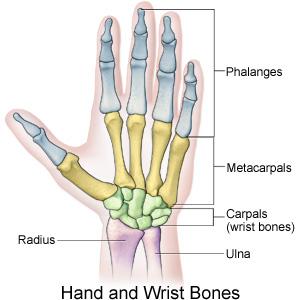 Earlier designs of wrist implants had high complications and failure rates, however, advances in prosthetic design have contributed to improved clinical outcomes and greater implant longevity.[4] The implant is made from metal and plastic and has 2 components- radial and distal component.

The radial component: is the part that fits against the end of the radius bone. It is made up of two pieces- a flat metal piece with a stem that attaches down into the canal of the bone and a plastic cup that fits onto the metal piece, forming a socket for the artificial wrist joint.

The distal component: is the part that replaces the small wrist bones. This piece is made completely of metal. It is globe shaped to fit into the plastic socket on the end of the radius. It is attached by two metal stems that fit into the hollow bone marrow cavities of the carpal and metacarpal bones of the hand. The ellipsoidal head simulates the curvature of the natural wrist and allows for a functional range of movement.

The prosthesis typically is stable and should demonstrate approximately 350 of flexion and 350 of extension with modest tightness at full extensions.

Typical symptoms of arthritis at the wrist include:

A longitudinal incision is made over the back of the wrist in line with the third metacarpal. The tendons are moved away to expose the wrist joint. Care is taken while moving the nerves to prevent any nerve damage. The damaged joint surfaces of the arm bones are removed with a surgical saw. The first row of carpal bones may also be removed. The radius bone is hollowed out and a radial component of the prosthesis is fixed inside it with bone cement. Depending upon the design of the prosthesis, the carpal component is placed in the remaining row of carpal bones or into the third metacarpal bone of the hand. The carpal bones may also be linked or fused together to better fix the carpal component. A plastic spacer is then fit between the metal components. With the new prosthesis in place the wrist joint is tested through its range of motion, and is irrigated with a sterile saline solution. The joint capsule is then sutured together. The muscles and tendons are repaired, and put back in place. The incision is closed and the wrist is bandaged with a sterile dressing. A cast is then applied.

Wrist arthritis is usually diagnosed following a review of medical history, a physical examination, and an X-ray-which is characterized by loss of joint space between the bones . Additionally, blood tests may also be ordered to confirm the presence of rheumatoid factor which suggests rheumatoid arthritis.

In patients with rheumatoid arthritis, a comprehensive pre-operative evaluation should be carried out. Prior to wrist arthroplasty, a hip or knee replacement surgery should be carried out to prevent weight bearing on the wrist prosthesis, improve hand balance and optimize rehabilitation of the digits.

Patients for wrist arthroplasty should temporarily discontinue medications such as methotrexate (anti rheumatic) and immune-modulating drugs after consulting with their rheumatologist to reduce the risk of infections and delayed wound healing. NSAIDs should also be reduced at least 10 days pre-operatively and 5 days post-operatively to reduce the risk of bleeding complications.

Regaining function of the hand following TWA is largely dependent on post-operative physiotherapy. Physical therapy should be started early beginning with gentle mobilization exercises and gradually progressing to resisted exercises.