Therapeutic currents are, special electric currents that are applied to human body for healing the body. Generally these are defined by using voltage-time chart of the current which can be seen in the oscilloscope screen. This page summaries the waveform of common therapeutic currents[1].

An ossiloscope is an instrument which is used to observe voltage changes during time in electric circuits. 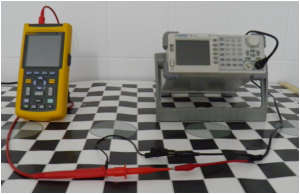 Frequency is a term which describes how many times a waveform repeat it self per second by signal generator.