The trochlear nerve is the fourth Cranial Nerve (CNIV) with the longest intracranial course, but also the thinnest[1]. It has a general somatic efferent (somatic motor) nerve, which innervates a single muscle (superior oblique muscle) on the contralateral side of its origin. [2] 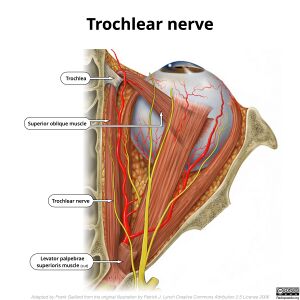 The trochlear nerve appears from the dorsal region of the brainstem around the level of caudal mesencephalon below the inferior colliculus, it winds ventrally around the brainstem and stretches forward to the eye through the subarachnoid space. It extends between the superior cerebellar and posterior cerebral arteries and penetrates the dura. It thereafter courses through the lateral wall of the cavernous sinus and joins three other cranial nerves – oculomotor nerve (CN III), abducens nerves (CN VI), as well as the first two branches of the trigeminal nerve (CN V), ophthalmic (V1) and maxillary (V2). They enter the orbit via the superior orbital fissure where the trochlear nerve supplies the superior oblique muscle. [3]

Trochlear nerve palsy may result from both peripheral – injury to nerve bundles or central – involvement of the trochlear nucleus, and lesions. Acute symptoms may indicate trauma, while chronic symptoms are mostly congenital. Vertical diplopia whereby injury causes weakness in the downward movement of the eyeball causing double vision due to unopposed actions of the other extraocular muscles, thereby producing two visual fields from either eye. Torsional diplopia affects the rotation of the eyeball in the plane of the face so that in tilting the head sideways, things look tilted in the affected eyeball while they remain vertical in the unaffected, thereby creating two visual fields. [6]

The clinical implications of CN IV palsy are indicated by superior oblique weakness. This muscle depresses and abducts the eyeball when working independently. The extraocular muscles, on the other hand, synergistically move the eye. As a result, the trochlear nerve is tested by having the patient look 'down and in,' as the superior oblique contributes the most to this motion. Reading the newspaper and descending the stairs are two common hobbies that necessitate convergent gaze. Diplopia is a critical sign of CN IV palsy when these tasks are performed. [6]

Exercises may be prescribed to strengthen the superior oblique muscle.