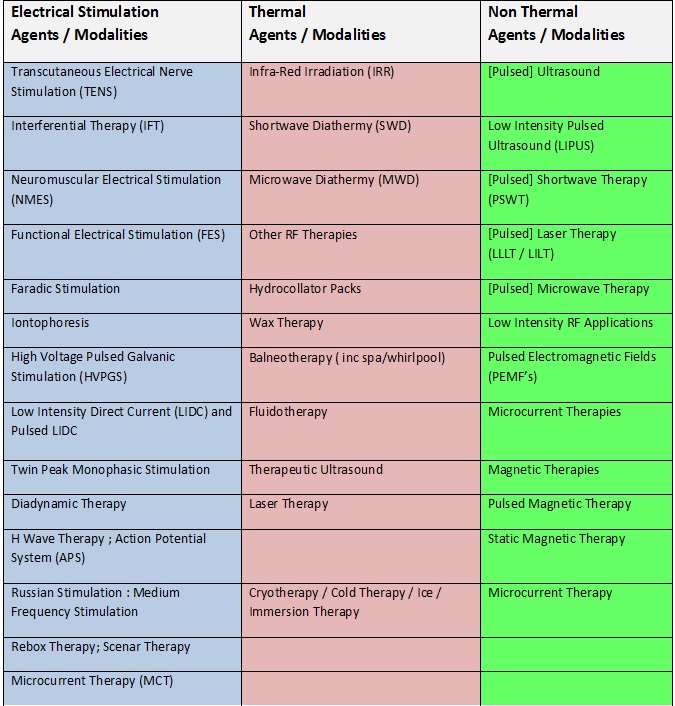 Electrical stimulation agents and thermal agents are the most used in physiotherapy pain management. However, non-thermal agents, such as pulsed ultrasound, have been reported as having an analgesic effect.

The exact mechanism of electrical stimulation’s beneficial effect remains controversial. Electrical stimulation is said directly block pain signals from reaching the brain so that the patient never experiences them. In addition, electrical stimulation has been shown to promote the release of endorphins which are natural painkillers produced by the body.Pain reduction occurs because the applied electrical fields act to close the body's "pain gate mechanism"TENS ( Transcutaneous Electrical Nerve Stimulation) is the widely used electical modality for chronic pain.


The video shows how TENS work:

In a Cochrane systematic Review by Johnson et al 2015[2] based on the six of the 19 trials TENS was found to be better than placebo TENS (delivering no electrical current) at reducing the intensity of acute pain but the reduction in pain was not consistent across all trials. There was an insufficient number patients to make a firm conclusion.More is research is needed to solidfy the evidence.For more information about TENS follow this link:Transcutaneous Electrical Nerve Stimulation (TENS)

Interferential therapy is a more deeper form of electical stimulation and is more comfortable to the patient.The following link provides more information on how it works:Interferential Therapy

When applied in successive fashion, heat and cold are believed to exert a physiological effect on your body's pain gate mechanism, which temporarily alters pain signals traveling to and from your brain. This temporary reduction in pain is a welcome relief for those suffering long-standing complaints of the nervous and musculoskeletal systems. Cryotherapy (Cold therapy) works for pain by eliciting the body’s “fight or flight” response  which stimulates the production of endorphins, thus decreasing the body’s perception of symptomatic pain

Thermal agents can be divided into two i.e

The description on the physiological effects,effectiveness,mechanism of action and current evidence is found on the following Physiopedia page :

There is moderate evidence[4] that heat  therapy reduces pain and disability for patients with back pain that lasts for less than three months. The relief has only been shown to occur for a short time and the effect is relatively small. The addition of exercise to heat wrap therapy appears to provide additional benefit. There is still not enough evidence about the effect of the application of cold for low-back pain of any duration, or for heat for back pain that lasts longer than three months.

Non Thermal agents do not make use of heat/cold to exert a therapeutic effect.Examples of these are shown in the table above.The following links give information about the physiological effect,mechanism of action and evidence in pain a management  to the most common non thermal agents :

In a systematic review by Yousefi-Nooraie (2008)[5] which comprised of seven studies with a total of 384 people with non-specific LBP of varying durations. “Three of the studies (168 people) separately showed that Low level laser Therapy (LLLT) was more effective at reducing pain in the short-term (less than three months), and intermediate-term (six months) than sham (fake) laser. However, the strength and number of treatments were varied and the amount of the pain reduction was small. Three studies (102 people) separately reported that LLLT with exercise was not better than exercise alone or exercise plus sham in short-term pain reduction.”

"...the useof hands in a curative and healing manner or a hands-on technique with therapeutic intent..." .It can be  divided into two groups i.e Soft tissue techniques and Joint techniques

Soft tissue - This is directed at morphologically shortened muscles and/or restricted fascial mobility Techniques includes the following ( list is not exhaustive):

Often there is an impairment in rotation(osteokinematics) and possibly an abnormal IAR. There is a need to restore tensile length and or tolerance for tensile load (distracting forces).

A detailed explaination of Mobilisation and its effect on pain can be read on this Physiopedia page: Maitlands Mobilisations There is no convincing evidence indicating whether mobiisations or manipulation are more effective than each other[7]. However regardless of this there is indication that neither of these therapies should be used in isolation, but as part of a wider treatment plan, mainly involving exercise.

A description of spinal manipulation is given on this Physiopedia page: Spinal Manipulation

There are variable results of research into the effectiveness of manipulation. There is a recent review by Rubinstein et al [8] that states:

"Spinal Manipulative Therapy (SMT) is no more effective in participants with acute low-back pain than inert interventions, sham SMT, or when added to another intervention. SMT also appears to be no better than other recommended therapies."

However, there is other work such as Bronfort et al[9] that suggests Manipulation is a useful tool in the treatment of Low back pain.

Massage and soft tissue treatment, is often employed by physiotherapists to aid pain relief. Details of this can be found on this Physiopedia page: Massage

Patients often provide anectotal reports of its benefits, however recent research is not as supportive of its long-term benefits. Furlan et al[10] states that:

"We have very little confidence that massage is an effective treatment for LBP. Acute, sub-acute and chronic LBP had improvements in pain outcomes with massage only in the short-term follow-up. Functional improvement was observed in participants with sub-acute and chronic LBP when compared with inactive controls, but only for the short-term follow-up"

Acupuncture is widely used by physiotherapist for the management of pain. There is much that we still need to understand about its exact mechanisms, however patients often report anecdotal evidence of its benefits. Take a look at this physiopedia page on Acupuncture.

The introduction of the acupuncture needle produces a numb, aching sensation called "DE QI" that is thought to be esssential for the effectiveness of the treatment. It is thought that this sensation contributes to the activation of the endogenous antinociceptive system. Bowsher(98)[11] and Wang(85)[12]theorised that De Qi is due to the activation of A delta fibres type I and III and the C-fibres releasing opioids in the dorsal horn.

Despite  acupuncture being widely used and reported as being helpful, it is disappointing that there is a lack of evidence to support this.

Acupuncture- The need for research

There are other reports that indicate that the evidence base for acupuncture is widening however such as this report by Ernst.

Acupuncture-the evidence base is changing

Postural re-education and movement retraining are the focus here. If you bill neuromuscular re-education, this likely falls under “retraining”. Balance and gait training also fall in this category.

This patient must change modify their current activities (they themselves may be preventing a healing response). Poor habits (lack of exercise, nutrition, vices such as smoking affecting intrinsic healing potential). They may need temporary or permanent changes to their lifestyle. This may include a cardiopulmonary exercise program (walking, biking, swimming program). This is NOT neuromuscular re-education, gait training, etc.

Bracing & taping are primary examples. This may also include self-traction at home for primary decompression issues. This patient often has poor tolerance for tissue loading, and therefore this treatment is directly aimed at increasing tolerance. This may include positioning that optimizes blood flow(abduction pillow for RTC repair).

This includes Grade I and II joint mobilization for pain dominant joints and spinal segments. The goal is generally NOT to restore joint translation (arthrokinematics) via tissue deformation of collagenous structures. This patient generally presents with excessive spasm and guarding. This may also include post-isometric relaxation which is focusing on resetting the resting tone of the muscle spindle, it may be physiologically shortened (as opposed to morphologically shortened). The patient may also need cognitive behavioral/psycho-social strategies such as relaxation to progress mobility, function, and/or pain control.

This includes stabilization of the muscular system through exercise. The goal of this is to improve cross-sectional area and either maximum force generating capacity of that tissue and/or the endurance of that particular tissue. This tissue usually does not have a high level of intolerance and therefore the focus is on increasing the optimal loading zone and the capacity for absorbing and or creating force.

Addtionally, stabilization is commonly utilized during a spondylolisthesis patho-anatomic hypothesis (shear dysfunction) and may be confirmed with segmental testing and/or radiography. You may feel a large neutral zone (laxity) with facet gliding at the L4/5 segment and therefore need to stabilize this segment.

Traditional Physiotherapy pain modalities can be integrated with other pain approaches i.e Pharmacological,Psychological,Exercise and Behavioural.There is little to no evidence on this subjcect more reasearch is warranted.


The articles below  give an insight regarding pain treatment approach integration:

For more information about other approaches follow the links below:

Exercise and Activity in Pain Management