The tracheobronchial tree is a branching tree of airways composed of: 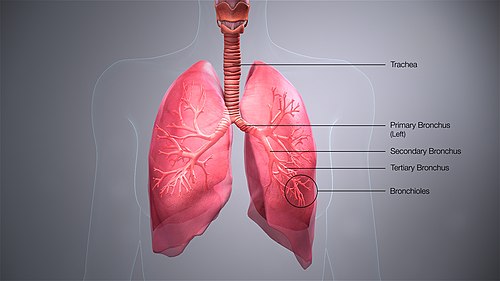 Its main function is the transfer of air from the environment to the lungs for gas exchange. The tracheobronchial tree has a branching structure of approximately 23 branches or generations extending from the trachea (generation 0) to the last order of terminal bronchioles (generation 23).[2][3]

The main functions of the trachea is to allow the passage of air into the lungs and provide a vital role in the mucociliary clearance of the respiratory system. 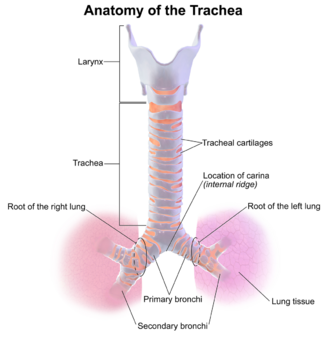 Figure 2: Anatomy of the trachea

Characteristics of the trachea[edit | edit source]

Figure 3: Cross-section of a trachea 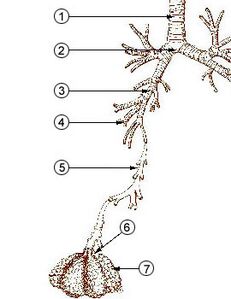 Bronchioles arise from segmental bronchi and represent the smaller branches of the bronchial tree. They differ histologically from bronchi as they lack C shaped cartilages in their walls.[8]

Physiotherapy plays an important role in most respiratory conditions like asthma , COPD, cystic fibrosis and others. A group of techniques such as active cycles of breathing, huffing, autogenic drainage, coughing, and forced expiratory can be used by physiotherapists to help remove extra mucus from tracheobronchial secretions. Thick or excessive secretions produced by respiratory disorders may become accumulated and as a result may develop bronchial infections. The role of physiotherapy is minimising the symptoms and educating people who have respiratory diseases on how to self manage their symptoms and prevent further complications.