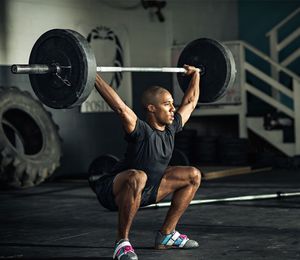 Strength training is a type of physical exercise specializing in the use of resistance to induce muscular contraction which builds the strength, anaerobic endurance, and size of skeletal muscles. It is also known as resistance training and it is indicated for muscle hypertrophy, strength gain, sport performance and physical rehabilitation, but in the last few years it has been promoted as a means for health promotion and disease prevention[1][2].

Repetition Maximum:which is often expressed as 1RM, or one-repetition maximum indicates the heaviest weight that can be lifted with maximum effort in a single repetition

10 Repetition Maximum or  10 RM: is the maximum weight that a subject can lift 10 times, In PRE, 10RM of a subject is determined

Comparison Between the DeLorme and Oxford Principles[edit | edit source]

Apparently, a  sparse number  of  research  studies  have  directly  compared these  two resistance training (RT)  methods.  Interestingly  in one  such  comparison, Fish et al.[4] reported no significant differences between both RT methods on strength gains. A study was conducted by da Silva et al. (2010) to compare the two principles of strength training and it was concluded from the results that there  were  no significant differences  between  the  DeLorme  or Oxford  methods  of  RT  on muscle performance or on serum enzymes activity responses over a 4 week period of training. Each method of training resulted in significant, but comparable, muscle strength gains and a low risk of injury. Thus the choice of one or another of these RT methods is acceptable for moderately active men.[3]

What is Repetition Maximum and 1RM